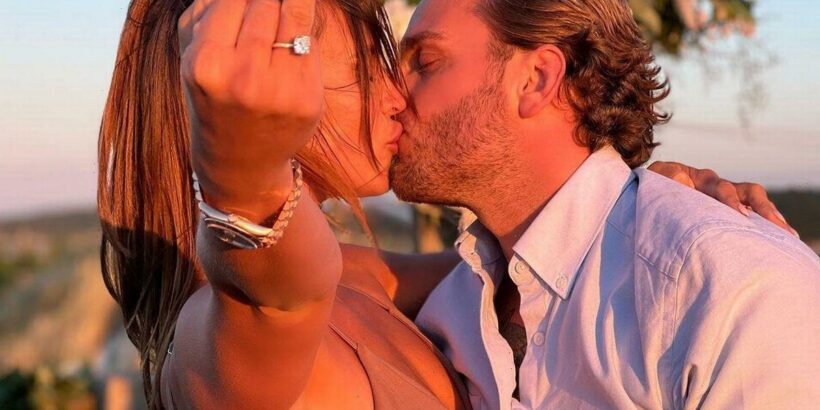 Reality TV star Ferne McCann has set her sights on a low-key wedding in the French Riviera after the backlash of her vile voice notes being publicly leaked.

Ferne's fiancee Lorri Haines engaged to the 32-year-old in July last year, with Ferne announcing the news via Instagram.

She posted a snap of her and Lorri kissing as she flashed her ring, adding the caption: "So happily ever afters do exist. I cannot wait to do forever with you baby,” alongside a love heart and a French flag emoji.

READ MORE: Holly Hagan's boobs have 'tripled' as pregnancy has reverted her to Geordie Shore size

But since the big surprise, a source revealed that Ferne has sifted her focus away from a big do, instead opting for a more intimate celebration.

"While Ferne has said to friends that of course every girl dreams about that huge, big wedding, she is at the stage now where she just wants her nearest and dearest there, she would love that" the source told OK! magazine.

The source continued: "She may go abroad but she is wanting to keep it a bit more low-key and much more intimate and focus on the friends and family that she’ll have there,"

In August 2022, Ferne revealed the pair had initially planned on getting married somewhere other than the UK, telling OK! that she and Lorri "love travelling together".

"We would definitely get married abroad. We met each other abroad and love travelling together," Ferne said.

It's believed the French Riviera may be on the cards for Lorri and Ferne as they both started following Chloé Atlan, an award-winning wedding planner based in Cannes who runs Aava Wedding on Instagram.

France bears sentimental meaning for Lorri and the First Time Mum star as the place where they became engaged, more specifically, a beach in Le Touquet.

Ferne's U-turn on her nuptials comes after voice notes leaked of her talking disparagingly about former TOWIE cast mate Sam Faiers and Billie Shepherd as well as one of the victims of her ex-boyfriend Arthur Collins acid attack in 2017.

She released a statement apologising for the voice notes, explaining that they had been "manipulated, edited and taken out of context."