FKA Twigs, Teyana Taylor, Teirra Whack and Rosalía are among the artists set to perform during Red Bull Music Festival New York, which will run April 30th through May 18th.

FKA Twigs will headline two shows, May 11th and 12th, at the Park Avenue Armory. The shows mark her first since 2016 and also follow her revelation last May that she underwent surgery to remove six fibroid tumors from her uterus. Per a press release, FKA Twigs will weave “those experiences into an intimate and dramatic live show” with “the music and dances inspired by her physical and emotional journey.”

Catalan singer Rosalía – whose widely praised album El Mal Querer arrived last fall – is set to open Red Bull Music Festival April 30th with one of the first shows at the recently-renovated Webster Hall. Taylor, meanwhile, will team with her all-female production company, the Aunties, to present her show, “House of Petunia,” at the Grand Ballroom at the Manhattan Center on May 15th. Philadelphia rapper Tierra Whack will deliver her first headlining show in New York at the Rainbow Room – the famous venue and restaurant on the 65th floor of Rockefeller Center.

The lineup for Red Bull Music Festival New York will also feature shows from Holly Herndon, JPEGMafia, Moor Mother and NYXO. The festival will close May 18th at Black Flamingo with an artist showcase featuring DJs from the Ugandan record label and collective, Nyege Nyege Tapes.

Tickets for all shows are on sale starting today, March 20th. Complete information is available on the festival’s website. 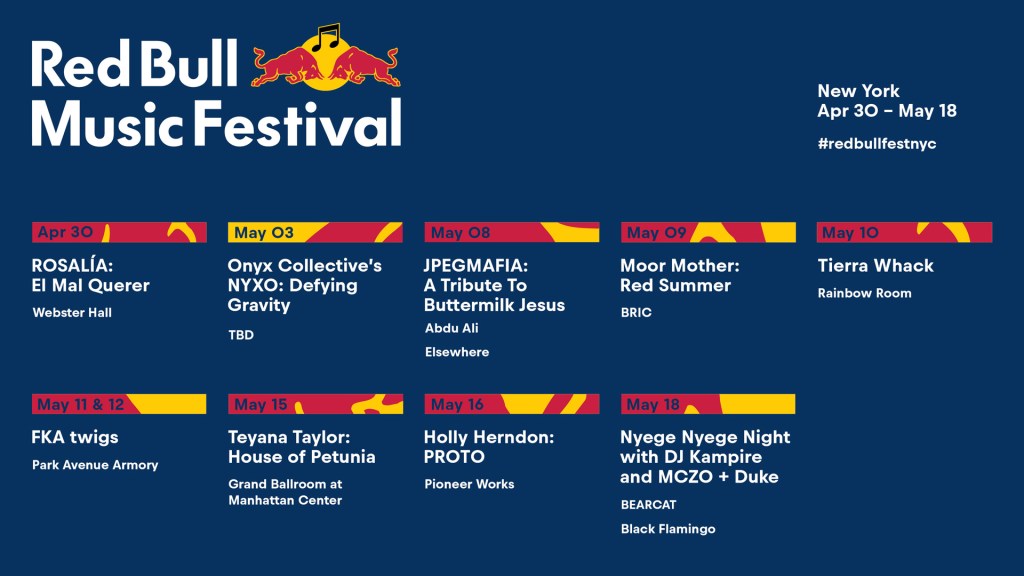