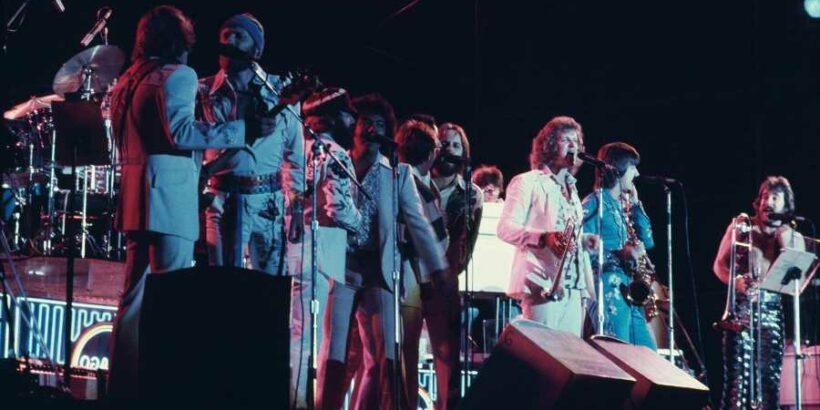 Brian Wilson and Chicago announced a co-headlining tour this week that will take them to amphitheaters all over America in the summer. It begins June 7 in Phoenix and wraps up July 26 in Clarkson, Michigan.

This might seem a little familiar to any Beach Boys or Chicago fans who were around in 1975 for the Beachago tour when the two bands teamed up for a successful run of arena gigs. Chicago were at their commercial peak, and the Beach Boys were suddenly a hot commodity after years of struggle thanks to an exploding Sixties-nostalgia movement.

The common thread between the two acts was veteran music producer Jim Guerico. He not only managed both bands during this era, but he even played bass with the Beach Boys on the road. Uniting them for a tour made a lot of sense since they appealed to a similar demographic, even if the critics weren’t always blown away by the show.

“The music on Thursday was, finally, amusingly mindless, although the Beach Boys were more amusing and Chicago more mindless,” wrote New York Times critic John Rockwell in his review of the tour. “Today the Beach Boys, even if they did offer a few selections from recent years, seem content to be a nostalgia band. Chicago, although it still sells lots of records, sounds less compelling today. The freshness of the brass arrangements has settled into a formula, and although the group plays tightly enough, there is a mechanical slickness that precludes real spontaneity.”

The show featured an hour of the Beach Boys, an hour of Chicago, and then 45 minutes of both acts onstage at once where they’d team up for hits like “God Only Knows,” “Wishin’ You Were Here,” “Darlin’,” and “Fun, Fun, Fun” before wrapping up the evening with “Jumpin’ Jack Flash” for some reason. “They did it enthusiastically,” Rockwell noted. “But the Stones — due into the Garden in eight days themselves — have been ending their tour shows with the same song, and they do it miles better.”

There’s very little watchable footage of the Beachago set available, but there are plenty of bootlegs. Here’s “Saturday in the Park” with Carl Wilson on lead vocals from a June 3, 1975, show in Chicago.

The Beach Boys and Chicago have stayed on the road almost continuously since their Beachago days, but the tragic deaths of Terry Kath, Dennis Wilson, and Carl Wilson, along with the bitter departures of Peter Cetera, Brian Wilson, Danny Seraphine, and Al Jardine have changed their lineups tremendously.

Brian Wilson wasn’t playing with the Beach Boys during the 1975 Beachago tour, meaning this is his first time touring with them. And if they unite their bands for an extended encore like the old days, only Al Jardine, Robert Lamm, and Chicago horn players Lee Loughnane and James Pankow will have firsthand memories of the original jams. Let’s just hope they don’t attempt “Jumpin’ Jack Flash” again. Much like 1975, the Stones are still around for that one, and they still do it miles better than anyone else.