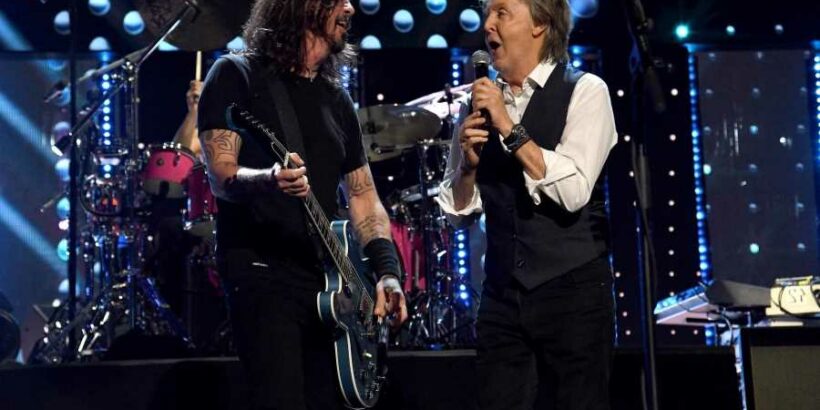 The band could’ve chosen any number of singles to perform, but kicked off their set with a particularly loose version of “Best of You.” Dave Grohl screamed his throat raw like he was already in the encore, propelled by Taylor Hawkins’ no-brakes drumming and the kinetic guitar work of Chris Shiflett and Pat Smear.

With hardly a pause, the Foo Fighters segued right into “My Hero,” another furnace blast of rock & roll fury and skyscraping riffs that included a lusty crowd sing-along. But the set, naturally, ended with what’s become the band’s signature, “Everlong.” Tonight’s version was punkish and even more urgent; keyboardist Rami Jaffee was noticeably swaying back and forth as the song simmered with nervous energy.

Black Sabbath on the Making of 'Vol. 4': 'It Was Absolute Pandemonium'

But despite the lightning-fast tempo of “Everlong,” Grohl stopped the song on a dime near the end — creating a moment of tension broken by him screaming, “One more time! Here we go!” as the song careened to its end. The performance was accelerated in part because the band — all six of them — still had induction remarks to give.

Following their speeches, the group returned to the stage, where Paul McCartney joined them for a show-closing cover of the Beatles’ “Get Back.” The Foos’ rendition was reverent toward the original, but with an extra bounce — they were jamming with McCartney after all. For his part, the Beatle looked thrilled to be revisiting the 1969 song, singing with a twinkle in his eye and goofing around with Grohl, trading falsetto vocal lines and sharing a mic.

Foo Fighters, who played an intimate warm-up show on Thursday night at Cleveland’s House of Blues, were inducted into the Rock & Roll Hall of Fame during their first year of eligibility — just like Grohl’s other band, Nirvana, who received the honor in 2014. That year, Grohl and bassist Krist Novoselic reunited to play together for the first time since 1994, enlisting Lorde, St. Vincent, Joan Jett, and Kim Gordon to take lead vocals on classic Nirvana tracks.

Speaking to Rolling Stone in May, Grohl compared the two experiences. “Nirvana’s induction was obviously bittersweet,” he said. “But we were honored to be there, mostly to honor Kurt’s amazing music. This will be a different vibe, for sure.”

Grohl is no stranger to memorable Rock & Roll Hall of Fame induction ceremonies. He and Hawkins inducted Rush in 2013 with a colorful speech and then wore kimonos while performing an epic version of “2112” with the Canadian trio.

In 2015, Grohl also showed up to help induct Jett, playing with her, Miley Cyrus and the Blackhearts. “We performed and after a few hours, I went up to the dressing room to drink and wound up smoking a joint with Joan and Miley Cyrus,” he told Rolling Stone, adding he rarely partakes. “I remember looking over, staring at Jerry Lee Lewis and just being … I don’t even have the words to describe it. I was tripping fuckin’ balls.”