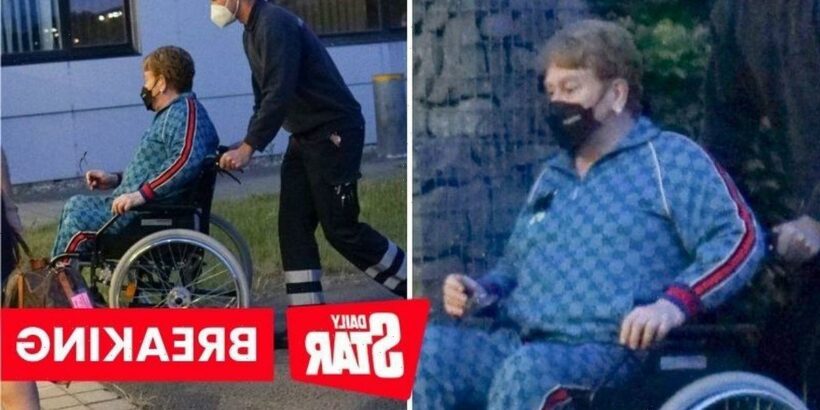 Elton John has been spotted using a wheelchair to get around ahead of his performance for the Queen’s Platinum Jubilee celebrations.

The legendary singer has recently had to take some time off from his Farewell Yellow Brick Road Tour due to health issues.

The 75-year-old has been using a wheelchair to aid his mobility and was seen looking as fabulous as ever in an all blue monogrammed Gucci tracksuit, which featured a red stripe down the sleeves and cuffs.

He wore a black face mask as he sat in the chair at Leipzig Airport, where he was heading home to Nice.

Elton is set to appear alongside Diana Ross for a pre-recorded performance during the Jubilee celebrations.

His European tour is likely set to continue soon afterwards.

Elton has relied on wheelchairs previously, most notably back in 2019 when he had a sprained ankle. He used the apparatus to keep himself moving and said that “not even a sprained ankle” could keep the musician from “seeing one of the most beautiful museums in the world” during his time in Florence. Rina has previously received at BRIT Award and collaborated with the 75-year-old back in 2021 on their duet Chosen Family.

CEO of European Festivals at AEG Jim King has spoken on Elton’s appearance at the historic location this summer.

He said: “Elton John has provided the soundtrack to the lives of so many of us and to know that his last tour is coming to Hyde Park, possibly the last time many of us will ever see him play, is one of the most important and 'must see' nights of BST Hyde Park ever.”

Elton will be joined by fellow titans of the music industry that many fans will recognise.

The Rolling Stones, Pearl Jam, The Eagles, Duran Duran and Adele are all set to perform at the event which takes place between 24 June and 10 July.