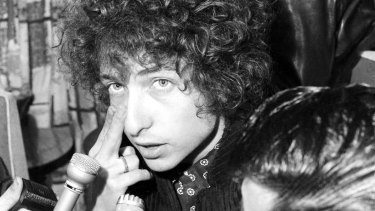 First published in the Sydney Morning Herald on April 13, 1966

Looking rather like an extra from "The Ten Commandments," Mr Bob Dylan arrived in Sydney yesterday and within half an hour had conducted an anti-interview, put down the Press — and parodied the whole performance.

Dylan disappointed Done of his disciples who crowded into the reception room at Kingsford Smith Airport to hear him. 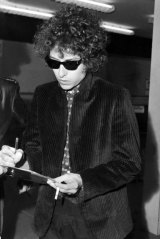 After the Customs check, Dylan was besieged by autograph hunters in camel-hair jeans, Toulouse-Lautrec blazers and Viva Zapata moustaches.

He obligingly signed himself "The Phantom" and accepted a pop-art envelope containing a letter made of newspaper and magazine cuttings.

He settled himself down for the Press conference and it was clear that the questioners had made up their minds that Dylan was either a protest singer with a message or a phony, or maybe both, and they weren' t going to be put off by any of that jazz about his just being a person who writes songs.

"Are you a protest singer?" "I haven't heard that word for a long time. Everybody knows that there are no protest songs any longer—it's just songs." "If you aren't a protest singer why does everybody say you are?" "Everybody? Who does?" "'Time' magazine." "Oh, yeah."

"In the brigade once" 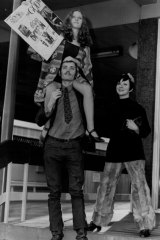 Martin, known as ” Skull,” Miss Larry Likely (on his shoulder) and Miss Jessica (“Noddy”) James Their Mission: to present Dylan with a long letter made of newspaper and magazine cuttings. April 12, 1966.Credit:Staff photographer

"Why have you started playing rock 'n' roll?" "Is that what they call it?" "Why have you gone commercial?" "I have not gone commercial, I deny it" (with Bible-swearing hand upraised). "Commercial – that's a word that describes old grandmothers that have no place to go."

"Why do you wear these outlandish clothes?" "I look very normal where I live, I'm conservative by their standards," "Does it take a lot of trouble to get your hair like that?" "No, you just have to sleep on it for about 20 years."

"What would you be if you weren't a songwriter?" "A ditchdigger called Joe."

In a 2014 interview with the ABC, ex-Herald journalist Craig McGregor revealed that following the publication of this article he was invited to a private hotel meeting with Bob Dylan, where the songwriter played him a test pressing of his next album, 'Blonde on Blonde'. The two remained in touch over the years, and McGregor later edited the book 'Bob Dylan: A retrospective'.