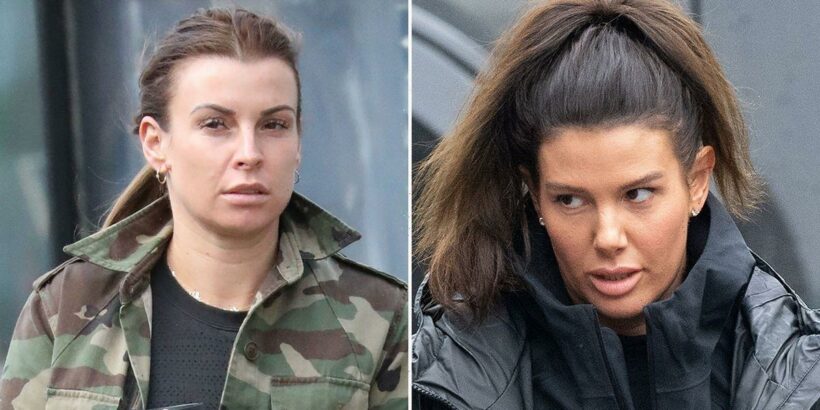 Teams of lawyers from both sides slugged it out in the High Court in London for two days over the leaking of fake news invented to snare a snitch.

The hearing revealed Rebekah Vardy called Coleen Rooney a 'c*** who needs to get over herself’ after she publicly named her as the culprit.

And some of the evidence may have vanished when Vardy’s PR agent’s phone was knocked from her hand into the North Sea after a wave hit her boat on a Scottish holiday.

Five of Britain’s top lawyers, including Johnny Depp’s brief David Sherborne, were involved in preparing skeleton arguments for the hearing – one of several ahead of a scheduled libel trial in May which could last more than two weeks.

Rebekah – represented by Hugh Tomlinson QC whose past clients include David and Victoria Beckham, Rio Ferdinand, Ashley Cole, Ryan Giggs and Prince Charles – will have faced a similar legal bill.

Vardy’s agent Caroline Watt – who Coleen wants to rope into the case – had to hire her own lawyer Ian Helme who expressed his concerns about the cost.

He described the case as 'money no object, no stone unturned, no point too minor’.

’’My client is not the wife of a football star. It is very important she should be aware of the financial implications,’’ he told the court.

At the end of the hearing the judge Mrs Justice Steyn reserved her ruling until Valentine's Day.

I'm A Celebrity star Rebekah, 39, is suing Coleen for libel claiming she wrongly publicly accused her of leaking details of her private life.

In a trap straight out of a whodunnit Coleen, 35, posted three fake tales on her private Instagram Stories account – and blocked all followers except Rebekah from seeing them.

When the bogus stories were published Coleen revealed the source of the leak on social media in dramatic style, announcing: "Its…Rebekah Vardy's account.''

Rebekah, who is married to Leicester City star Jamie, denies she was the leaker and wants damages and a restraining order preventing Coleen repeating the allegation.

Coleen has applied to add Watt to the case – which has so far cost around £1.5million – so she can make a claim against her for misuse of private information and breach of data protection laws alleging she too was involved in the leak operation.

Both Vardy and Watt are fighting the application.

The staggering cost of the case stunned Brits who the Bank Of England has warned face the steepest drop in living standards for 30 years.

Interest rates are set to soar to 7.25% by April meaning the cost of everyday goods like groceries will rise even further while wages stagnate.

While Ofgem has warned energy prices will rise by 54% in April when workers will be hit by a National Insurance hike to help fund social care and NHS costs during the pandemic.

The extravagant WAGs’ battle sparked outrage in the court of public opinion as Brits vented their fury on social media and in online forums.

One wrote: "With everything going on in the world, this is unbelievable. Self indulgence at its zenith. Absolutely pathetic.’’

Another said: "Meanwhile in the real world people are still waiting for their hospital appointments, families are struggling to pay their bills, the queues at the food bank get longer, people are cutting back on their heating in the home.’’

"There are far more important things going on in the world than the ongoing disputes between these two divas who have nothing else to do. Dreadful pair,’’ added a third.

Another wrote: "For God's sake! This is totally boring and irrelevant to what is happening in the UK right now! How about handbags at dawn to settle it-and no we don't care who wins!’’

"If these 2 had to earn a living they wouldn't waste so much on vindictive texts and court costs. What a pair,’’ one more said.

Others branded the court fight 'ridiculous’, 'pathetic’, 'trivial’, `playground stuff’, and 'designer handbags at dawn’, dubbed the duo 'clowns’ and told them: "Seriously girls, grow up.’’

One joker added: "Unless it's naked mud wrestling to decide the outcome…..NO ONE CARES!’’

The hearing cost the WAGs around £500-a-minute based on 10 hours of live court hearings over two days – though the legal bill included preparation work.