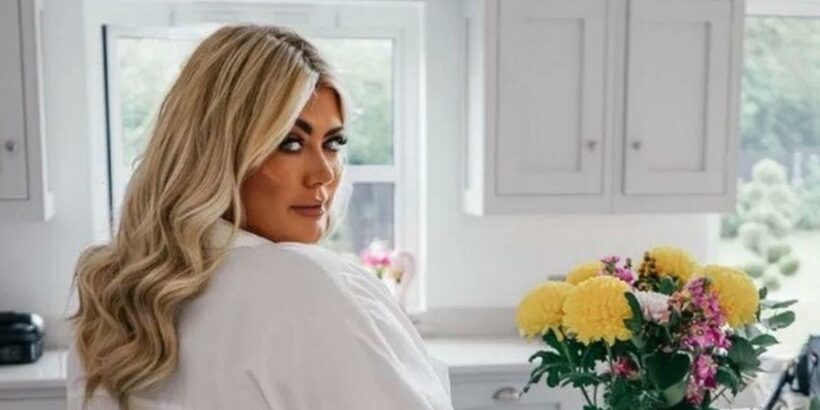 Gemma Collins has once again taken social media by storm as she flaunted her shrinking waist.

The Only Way is Essex star Gemma looked totally at ease as she slipped into a pair of figure-hugging zebra patterned trousers and leaned against the counter in her swanky chrome kitchen.

The blonde bombshell paired the slinky trousers with a baggy white blouse rucked just up above her hips as she showed off her purchase of a TENS unit, with the sticky pads attached to her skin.

The stunner’s sleek blonde tresses fell into waves just past her shoulders as she turned to give the camera a sultry smile, looking glam in long lashes and a nude lip colour.

Gemma went all-out with the glam ensemble, with neon pink nails to complete the look.

Fans rushed over to the comments section to show Gemma some love, with one posting: "GC looking HOT!"

"You look the most beautiful I’ve seen you on this picture! Hope good things are happening for you lovely!" another gushed.

While someone else said: "Absolutely stunning girl!"

And a fourth fan followed up: "She looks incredible!"

Gemma has been putting her all into wellness recently, and making huge strides in doing exercise and eating healthily.

The TOWIE star now has her sights set on becoming a mum after losing an incredible four stone.

40-year-old Gemma, who has polycystic ovary syndrome, previously suffered a tragic miscarriage – but speaking about her plans for the future, she revealed: "I’m going to have a baby next year.

"Rami and I are going to try – we’re really excited about that."

Gemma wants a TV show all about becoming a mum with Rami, which will go into detail about her struggles to get pregnant due to her PCOS.

Gemma’s also looking to tie the knot with Rami – 10 years after he initially proposed to her.

The pair split and Gemma later got with TOWIE co-star James Argent, but the relationship ended in July last year.

Since then, Gemma has once again reunited with Rami.

Speaking on her Gemma Collins podcast, the GC explained: "Rami asked me to marry him – well he asked me 10 years ago – and it was only 10 years later that I actually thought ‘ooh yeah, maybe I do want to marry you now’.

"It just took 10 years for me to get my head around it, but I’m delighted now.

"Who knows, I’m sure he’ll get down on one knee at one point, who wouldn’t?"