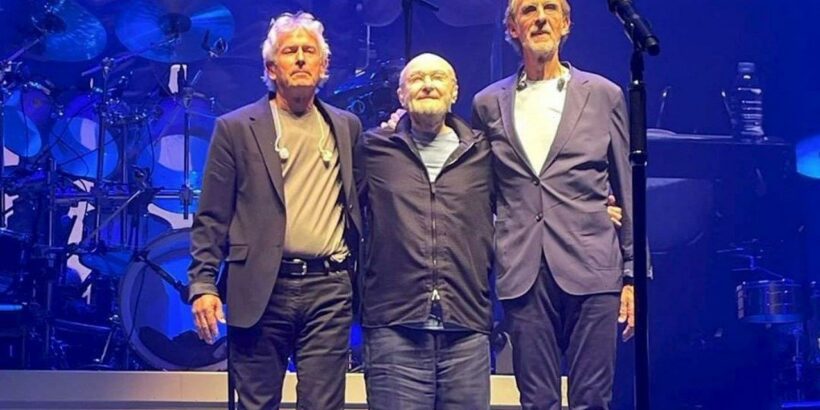 Phil Collins and his bandmates have been forced to postpone their upcoming final tour dates as a group because of the Covid-19 outbreak ‘within the band.’

AceShowbiz –Genesis have been forced to postpone their final four U.K. reunion tour dates after more than one positive COVID test “within the band.”

Frontman Phil Collins, who is performing only as a singer, due to nerve damage in his hands, has passed drumming duties to his 20-year-old son, Nic. He previously stated these would be the last-ever Genesis shows.

On Friday (08Oct21), a message was shared to the band’s official Twitter account to inform concertgoers that Friday night’s show in Glasgow – as well as the next three concerts in London, had been postponed.

“Following guidance and advice from the Government, it is with huge regret that the final four shows of Genesis’ Last Domino? Tour (this evening (8/10) at Glasgow SSE Hydro and 11, 12, 13 October at The O2 in London) have had to be postponed due to positive COVID19 tests within the band,” the statement read.

“We are working to reschedule them as soon as possible and will announce the new dates through our website (www.genesis-music.com) and social media channels as soon as possible,” the message added. All tickets will remain valid and ticket holders will be contacted by their ticket providers.”

The statement did not specify if any band members – who include keyboardist Tony Banks and guitarist Mike Rutherford – had contracted the virus.

“This is a hugely frustrating development for the band who are devastated with this unlucky turn of events,” the note continued. “They hate having to take these steps but the safety of the audience and touring crew has to take priority. They look forward to seeing you upon their return.”

The tour was originally set for November to December, 2020 but was pushed back due to the coronavirus pandemic.