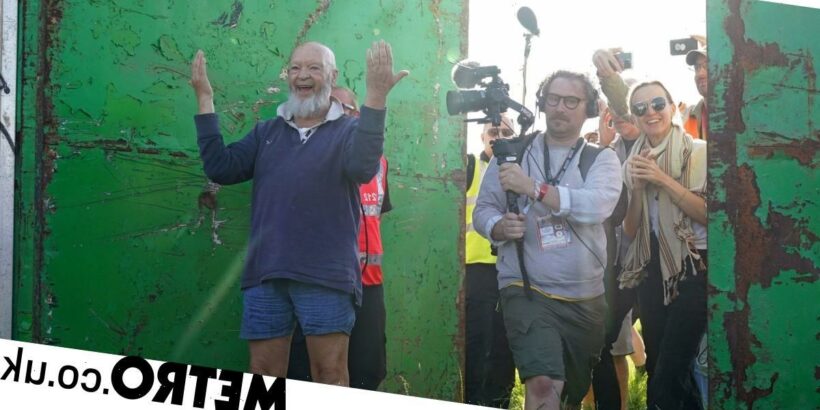 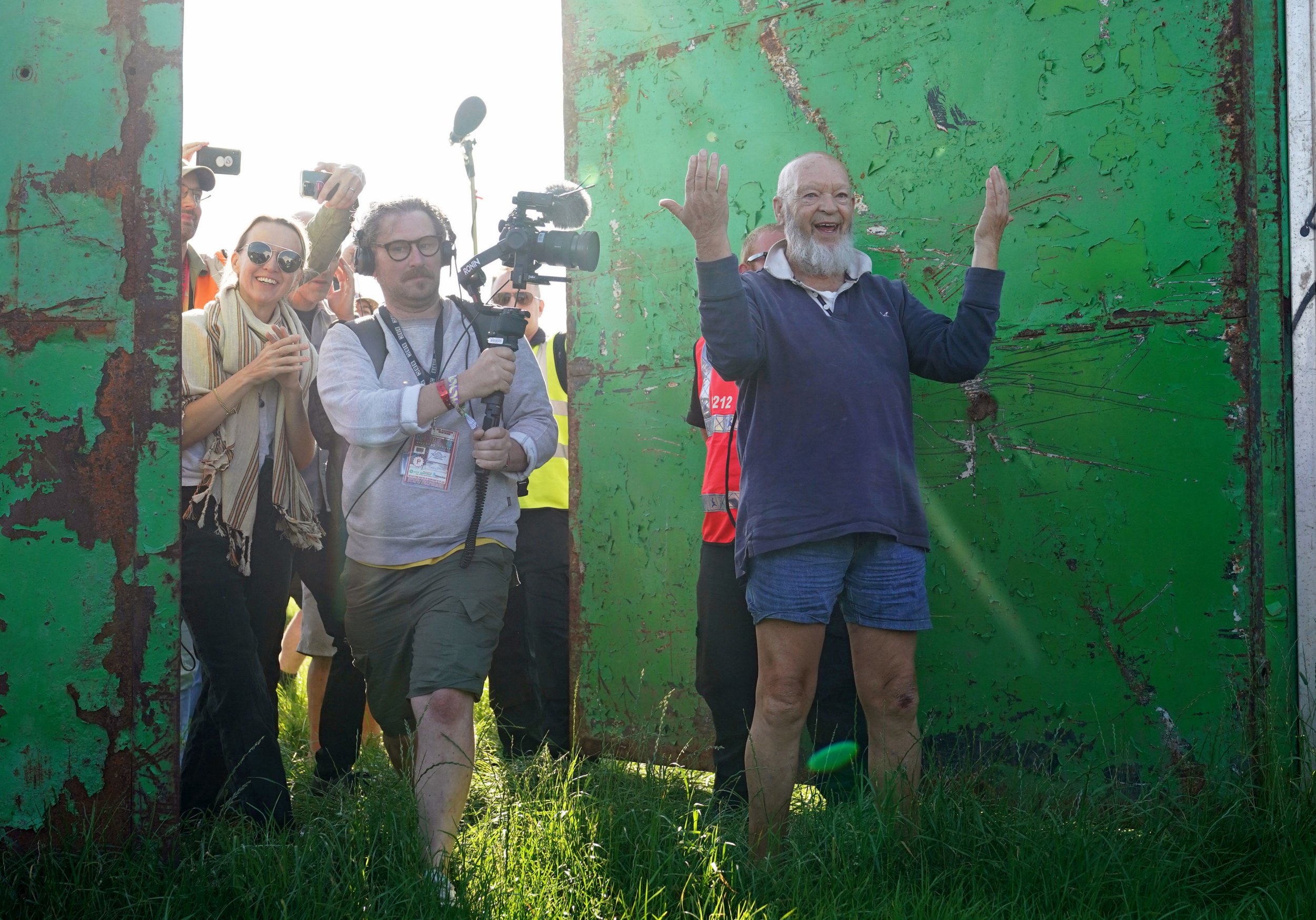 Well folks, Glastonbury is officially open once again after three years, with Michael Eavis on hand to open the famous gates and welcome punters to Worthy Farm.

The festival’s founder stood on the other side of the bright green gates at 8am this morning, in a tradition he’s held each year before the festival was forced to postpone its 2020 and 2021 events due to the pandemic.

Michael and his daughter Emily Eavis stood at one of the many entry points and clapped as the first attendees entered the site, with the 86-year-old saying: ‘This is going to be the best show in town.

‘Wait and see. You better believe it.’

Emily was on-site bright and early, sharing a glimpse of the fields for fans on social media, in anticipation of the 200,000 people due to pitch tents, don their wellies and get amongst another year of musical and cultural goodness.

The festival is celebrating its 50th anniversary, with thousands flocking to Worthy Farm in Pilton, Somerset for the five-day event.

Celebrating its opening, Emily shared a nod to Sir Paul McCartney, who will be headlining the Pyramid Stage on Saturday night.

A poster advertising the Glastonbury Free Press was seen on a pole with the words ‘Get Back To Where You Once Belonged, which referred to the lyrics of The Beatles’ song Get Back.

She wrote on Instagram alongside the picture: ‘Gates are OPEN… Welcome everyone to Glastonbury 2022!’

As the gates opened Emily added it is an ‘amazing feeling’ to see people returning to Glastonbury.

Speaking to Lauren Laverne on 6 Music, she said: ‘I mean, I’m still recovering because the build up has just been so long, we’ve never had a build up as long as this, obviously.

‘We’ve never all collectively been through such an extreme time together, so it’s like, to actually be able to see people there and welcome them in and just watch them streaming in and just running to pitch their tents up and fill the fields, it’s just an amazing feeling.’

Speaking about the build-up to this year’s event she told the BBC radio presenter that, as this year celebrates the festival’s 50th anniversary, some of the original ideas for the 2020 festival are ‘are still kind of playing out this year and then we’ve melded all kinds of ideas into this one festival and we’ve had so much time to kind of think about this one and I think every detail, and kind of part of the process has been devoured and savoured by everybody, because it’s so precious.

‘Everyone is appreciating it so, so much… everyone is just still beaming because they are so pleased, everyone is so chuffed to be back so it’s a totally unique atmosphere, I just can’t wait to get everyone in here.’

At 8am hundreds of Glastonbury attendees had been queueing for hours with their bags, with some saying they arrived at the site in the early hours of the morning to make sure they got a good spot.

Stewards in high visibility jackets have been guiding hundreds of vehicles on and around the site as many of those making their way to the festival have opted to avoid train journeys.

For those who have travelled to the festival’s nearest railway station, Castle Cary, current travel estimates at 7am today anticipated a 28-minute journey to the site.

Mark Lawrie, 49, from Reading, who now works for a sports charity, said he had arrived at the festival at 2am with his 18-year-old daughter Bethan after spending the night in their car.

He told PA News Agency: ‘We slept in the car for a few hours and joined the queue at 6am. This is our third time and it’s always brilliant… the moment you get here and start to see the tops of the tents you get such a buzz. It’s always such a positive atmosphere here, everyone’s just so nice to each other and friendly to each other, but I think after what we’ve been through the last two and a half years it’s going to be special.’

Bethan said the act she is most looking forward to is Billie Eilish, who is headlining Friday night, while her father said he is hotly anticipating Sir Paul.

Lawrie noted: ‘When I was first a primary school teacher, I didn’t realise this but I lived next door to (McCartney) in East Sussex. One morning he was walking his dog outside and I had a hangover so I was in bed and didn’t go to say hello to him.

‘My parents will absolutely never forgive me for not having done that, so he’ll be amazing to see.’

Jo Whiley has said Glastonbury is the ‘ultimate festival’ and that Sir Paul’s headlining slot on the Pyramid Stage on Saturday night is a ‘very, very important and significant performance’.

The former Beatle, 80, will become the music festival’s oldest ever solo headliner when he takes to the stage this weekend as the event returns after being cancelled for the last two years due to the coronavirus pandemic.

Speaking to BBC Radio 4’s Today Programme, Jo said this morning: ‘Glastonbury is the ultimate festival, it’s a celebration of all the arts and it’s all about the human experience.’

She added: ‘Everyone is just so friendly, so you make lots of friends, it’s just a wonderful experience and yeah, you might get muddy, you might get a bit wet, but the great British spirit, we just get on with it don’t we and we just enjoy ourselves regardless….’