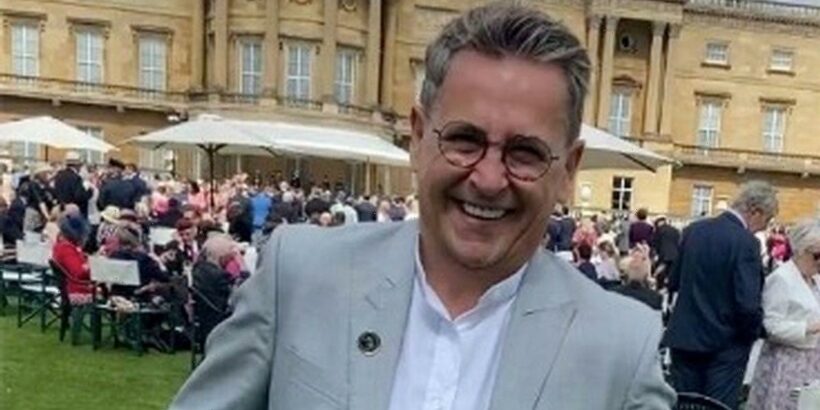 Gogglebox favourites Stephen Webb and his husband Daniel Lustig showed how well they can scrub up as they shared an insider look at a Buckingham Palace garden party.

With fans insisting the pair look "dapper", the hairdresser joked that the suit was actually a little "snug".

The couple, who have appeared on Channel 4's Gogglebox since 2019 and wed in 2018, attended the annual party at the Royal home for veterans charity The Not Forgotten.

The charity supports those wounded and disabled.

Stephen posted to social media to give fans a glimpse into the day, sharing two side by side snaps of each of them.

Showing off a light grey, close-fitting suit, Stephen can be seen laughing in the snap while Daniel is captured in his navy blue suit with a teacup in hand.

The two had shared their look before they arrived at the palace in a short video, making their followers chuckle.

Stephen said: "We're off to Bucking Palace…" as husband Daniel can be heard in the background, calling: "ooo."

Stephen continued: "and I'm pleased to say we're back in our wedding suits…" with Daniel chiming in: "skinny minnies!"

However, Stephen did joke: "Albeit, mine's a little bit on the snug side."

Fans flooded the star's post with compliments, with a whole host of red hearts lighting up the comment section.

One fan asked: "Looking gorgeous the pair of you, did you get to see Giovanni?"

While that question went unanswered, the compliments continued to flood in, with another writing: "Swit swoo, look at you two, very dapper indeed."

Stephen had viewers in stitches with his wardrobe not too long ago as he managed to suffer a major malfunction, flashing his pants to the nation.

Attempting to try out a quick workout on the show, he told viewers: "I thought I'd try skipping in the house. 20 minutes a day."

Yet when he started skipping behind the couch, he struggled to get into a rhythm, joking: "I'm not very good at it, am I?"

Things went from bad to worse as he tried to persevere but instead, his shorts fell all the way down.

The star revealed he'd been losing weight and had shed 11lbs since "being good".

He lovingly teased his husband, telling him: "I think you need to watch out because, in a couple of months' time, I'm going to be out of your league really."

For more of the latest showbiz news from the Daily Star, make sure you sign up for one of our newsletters here.