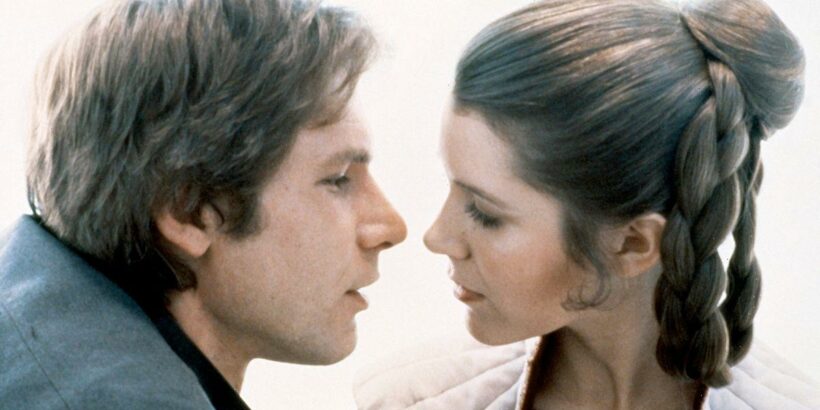 Star Wars was catapulted into the public eye in 1977 when George Lucas’ legendary film was released, and Carrie Fisher and Harrison Ford were the stars of the show.

Carrie played the iconic role of Princess Leia, and Harrison – who turns 80 today, July 13 – took on the part of her on-screen love interest Han Solo, alongside Mark Hamil who played Luke Skywalker.

The pair worked together for the next two films in the Star Wars franchise: The Empire Strikes Back, 1980 and Return Of The Jedi in 1983.

They were often pictured together looking close, but they did not reveal they had an affair until 40 years later.

Rumours that the co-stars were having an affair began very quickly, and the media quickly wrote stories but had no concrete evidence to support their speculation.

The relationship was only confirmed in a final memoir from Carrie Fisher, called The Princess Diarist.

In the book, she confirmed that she did have an affair with the then 33-year-old Harrison, while she was 19.

The book, released in 2016, was based off diaries that Carrie kept around the time of filming in 1977.

Did Carrie and Harrison ever date?

Carrie appeared on the Today Show after her book release and told presenters Hoda Kotb and Kathie Lee Gifford that it was more like a “three-month one-night stand” and that the romance was mostly sexual.

She said she felt guilty at the time about the affair, but on location “everything is permitted”.

In the memoir she revealed that she was “obsessed” with Harrison but that he didn't feel the same way, despite her attempts to start a relationship with him being her “number one priority”.

Years later, there were still strong feelings shared and in 2016 – shortly before her death – Carrie told the Guardian: “Yes, I love him. I’ll always feel something for him.”

Who else did Carrie and Harrison date?

At the time of their affair, Harrison was married to his first wife Mary Marquardt, having wed her in June 1964, before eventually divorcing in 1979.

There were reports that Carrie and Harrison briefly rekindled their romance after his divorce, during the filming of The Empire Strikes Back, but the relationship never became long-term.

He went on to marry Melissa Mathison between 1983 until 2004, followed by his current wife Calista Flockhart, who he married in 2010.

Carrie went on to have various relationships, including being married to musician Paul Simon for one year between 1983 and 1984 despite having been in an off-and-off relationship since 1977.

She was later in a long-term relationship with talent agent Bryan Lourd, whom she shared a daughter with named Billie before they separated.

Sadly, the actress passed died on December 27 aged 60, only one month after the book was released, from a sudden cardiac arrest.

It was confirmed that she had cocaine, morphine and ecstasy in her system when she died, though it was not confirmed if they contributed directly to her death.