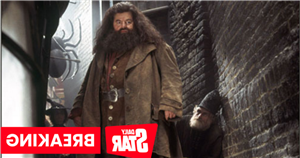 The Hollywood star is best known for playing Rubeus Hagrid in the movie franchise.

In a statement, his agent Belinda Wright said "My client and friend Robbie Coltrane OBE passed away on Friday October 14.

"Robbie was a unique talent, sharing the Guinness Book of Records’ Award for winning three consecutive Best Actor Baftas for his portrayal of Fitz in Granada TV’s series Cracker in 1994, 1995 and 1996 with Sir Michael Gambon.

"He will probably be best remembered for decades to come as Hagrid in the Harry Potter films, a role which brought joy to children and adults alike all over the world, prompting a stream of fan letters every week for over 20 years.

"James Bond fans write too to applaud his role in GoldenEye and The World Is Not Enough.

"For me personally I shall remember him as an abidingly loyal client. As well as being a wonderful actor, he was forensically intelligent, brilliantly witty and after 40 years of being proud to be called his agent, I shall miss him.

"He is survived by his sister Annie Rae, his children Spencer and Alice and their mother Rhona Gemmell. They would like to thank the medical staff at Forth Valley Royal Hospital in Larbert for their care and diplomacy.

One fan penned: "RIP #robbiecoltrane just read the news. An shocked. Thoughts and prayers go out to his friends and family #hagrid #harrypotter."

Another added: "Very sad to hear that Hagrid actor, Robbie Coltrane, the previous resident of my old house, has passed away at the age of 72."

Another added: "Very sad to hear that Hagrid actor, Robbie Coltrane, the previous resident of my old house, has passed away at the age of 72."

A third person posted: "No, not Hagrid."

While a fourth social media user said: "Ah no! Wonderful actor, to many he will Hagrid but to he will always be Fitz in Cracker. God Speed Sir."

As well as playing Hagrid in the Harry Potter movies, Robbie also played Valentin Dmitrovich Zukovsky in the James Bond films GoldenEye and The World Is Not Enough.

He was appointed an OBE in the 2006 New Year Honours by Queen Elizabeth II for his services to drama.

Robbie started his career appearing alongside Hugh Laurie, Stephen Fry, and Emma Thompson in the sketch series Alfresco in the early 1980s