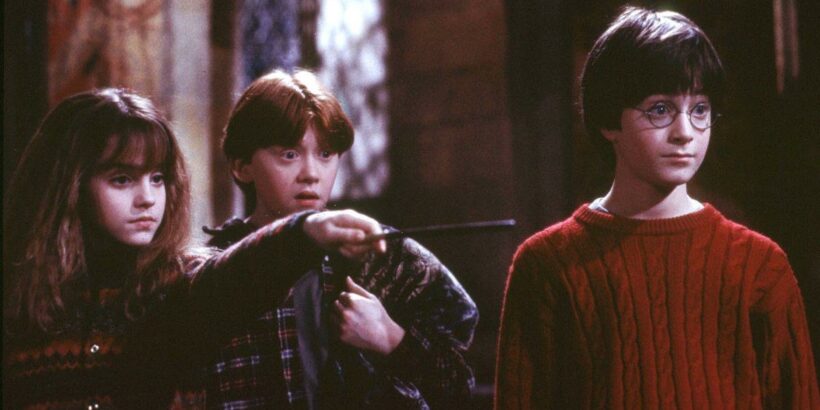 The Harry Potter films are dearly loved all over the world – but some of the tales from the set are almost as magical as the movies themselves.

Based on JK Rowling's hit Hogwarts books, the eight Potter films were shot over the course of 10 years – so fans of the wand-waving fantasy franchise got to see Daniel Radclife and his co-stars grow up on their screens.

During that decade, tons of fascinating tales from the making of the films have emerged – and they involve hilarious off-screen antics and secret dramas.

The highly anticipated cast reunion, called Harry Potter 20th Anniversary – Return To Hogwarts – is set to be released today (January 1) and UK viewers can watch it on Now TV.

It sees the legendary cast get back together on the 20th anniversary of the first film and share stories from their stint as wizards at Hogwarts.

To celebrate the highly-anticipated Harry Potter reunion, Daily Star have rounded up some of the most mind-boggling moments from the set of Harry Potter.

Emma Watson had a crush on Tom Felton

Although Draco and Hermione were rivals in the films, it turns out Emma had a secret crush on her co-star Tom when they were youngsters.

Emma revealed that she fell in love with Tom – but unfortunately the romance wasn't meant to be as he saw her as a "little sister".

She said: "And I just don't know how to say it – I just fell in love with him.

"He was three years above me and so for him he was like, ‘You're like my little sister."

Although Emma said that Tom never shared the same feelings, Tom admitted that he knew about her crush.

He said in the reunion interview: "I think I was in the hair and make-up chair and someone said something along the lines of, ‘Yeah, she had a crush on you,’

"I became very protective over her. Yeah, I've always had a soft spot for her and that continues to this day. There's always been something that's like, I don't know, a kinship."

Daniel Radcliffe was pranked by his co-stars

During the filming for the third film, The Prisoner of Azkaban (2004), Daniel had a crush on one of his co-stars.

One particular scene involved Harry and his fellow students having to sleep in sleeping bags as they stayed in the hall – so Daniel asked to have his sleeping bag moved next to the girl that he fancied.

However, Dumbledore actor Michael Gambon and Snape star Alan Rickman knew about the crush, and they teamed up to play a cheeky prank on Daniel.

They arranged for a 'farting' machine to be placed in Daniel's sleeping bag – and Michael proceeded to set it off multiple times during a scene where Dumbledore had a long speech.

As Michael delivered his speech, he kept pressing the button which let loose the loud farting sound which echoed in the huge hall.

Poor Daniel was mortified, and the whole room burst out laughing when they realised Harry had been stitched up.

The cast stole props from set

With so many fabulous wizarding items around on set, it wasn't surprising that some of the stars stole various items from the set to keep as a souvenir.

Alan Rickman once stole a stack of coins from the Gringott's set – according to his co-star Jason Isaacs, who played Lucius Malfoy.

Apparently, Alan was an expert in thieving props and he managed to take home a collection of coins from the Gringott's bank on the first day of shooting for the goblin-related scenes.

Isaacs said that he tried to steal a copy of the Daily Prophet as there were tons lying around – but he got caught out.

He asked director David Yates if he could take a copy home, but a member of the crew spotted him with the Potter paper in his bag – and said that Yates wanted the prop back.

Jason admitted that he felt embarrassed about the moment.

The actor playing Crabbe was fired

Jamie Waylett originally played Vincent Crabbe in the first six Harry Potter films, but he was later sacked from the franchise due to his dealings with illegal substances.

Jamie had been arrested in 2009 for growing cannabis at his home – and he was later charged for possession of the drug.

They filmmakers decided to remove Crabbe from the Room of Requirement scene – a scene that the Slytherin character had initially meant to be in.

Instead, they replaced him with Blaise Zabini, another Slytherin student from Draco's cohort.

Everyone knows Tom as Harry's arch-nemesis – Draco Malfoy, and he played the character brilliantly.

However, he didn't originally intend on playing the bad-boy Slytherin student, because he auditioned to play the roles of Harry Potter and then Ron Weasley.

When the roles went to Daniel and Rupert Grint, he went for the role of Draco. Acting legend Maggie Smith might have been diagnosed with breast cancer, but that didn't stop her from playing her iconic role as Professor McGonagall.

The two-time Oscar winner was diagnosed with the cancer in 2007, but she struggled through the rigorous filming process to shoot Harry Potter and the Half-Blood Prince.

She was still undergoing chemotherapy at the time, which makes her performance even more impressive, and she reportedly made a full recovery in 2009.

Helena Bonham Carter played evil witch Bellatrix Lestrange in the films – and it seems the classy actress got a bit carried away when getting into her ruthless Death Eater role.

That's because she accidentally perforated Matthew Lewis' eardrum – in a scene where Bellatrix was supposed to be threatening Neville (Matthew) with her wand.

Helena herself said of Matthew's injury: "By mistake, I poked him in his ear. I thought I could brandish the wand like a sort of Q-tip, and clean out his ear. Sort of torture it. But unfortunately he moved toward the wand as I was prodding it."

Matthew, however, didn't tell his colleague how bad the ear injury was until days after it happened.

Making a film about witches and wizards was bound to pose some serious challenges for the production team.

In a world where owls deliver mail to Hogwarts students, fans would be forgiven for thinking that the nocturnal birds were a stroke of animated genius.

However, the production team actually trained real-life owls to carry letters to the actors – so it was all real.

The crew even hand-wrote the Hogwarts acceptance letters which famously flooded the Dursley house in the first film.