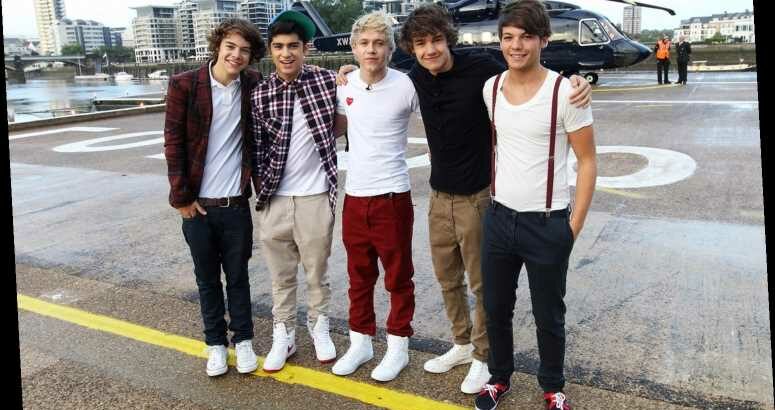 He’s Got the X-Factor In 2010, Styles (then just 16 years old) auditioned for The X Factor with Stevie Wonder’s “Isn’t She Lovely.”

At the time, Styles was the lead singer in a band with his friends at school, White Eskimo. He said in his X Factor debut, “Singing’s what I want to do and if people who can make that happen for me don’t think that I should be doing that, that’s a major setback in my plans.”

While Styles wasn’t chosen to compete as a solo artist after the show’s “bootcamps”, it wasn’t quite the “setback” he had envisioned it would be. Instead, he was asked to join a group with future One Direction bandmates Liam Payne, Louis Tomlinson, Niall Horan and Zayn Malik.

The group finished in third place in the competition. In 2011, the group released their first single “What Makes You Beautiful,” and their debut album, Up All Night. Soon thereafter, One Direction became the first British group to have their debut album hit number one in the U.S. The band toured around the world, with their 2014 tour become the highest-grossing tour of that year, according to Forbes.

That same year, Four debuted at number one on the Billboard 200 chart, making the band the only group in history to have their first four albums enter at number one, according to Billboard. In March 2015, the group announced in a joint statement that Zayn Malik would be leaving One Direction.

“My life with One Direction has been more than I could ever have imagined,” said Malik. “But, after five years, I feel like it is now the right time for me to leave the band. I’d like to apologize to the fans if I’ve let anyone down, but I have to do what feels right in my heart. I am leaving because I want to be a normal 22-year-old who is able to relax and have some private time out of the spotlight.”

He added, “I know I have four friends for life in Louis, Liam, Harry and Niall. I know they will continue to be the best band in the world.”

In response to his statement, Malik’s bandmates said, “We’re really sad to see Zayn go, but we totally respect his decision and send him all our love for the future. The past five years have been beyond amazing, we’ve gone through so much together, so we will always be friends. The four of us will now continue.” In August 2015, the group announced that they would be taking an extended hiatus as a group starting in March of the following year. In June 2016, Styles signed a solo deal with Columbia records, dropping his self-titled album in May 2017. Harry Styles debuted at number one in both the United States and United Kingdom, with the album’s lead single, “Sign of the Times,” hitting number one on the UK Singles Chart and number four on the Billboard Hot 100. Styles appeared on Saturday Night Live in April 2017 to sing  “Sign of the Times” and “Ever Since New York.” In March 2016, Styles landed his first film role in Christopher Nolan’s Dunkirk. The movie premiered in 2017, and though Styles’ role was small, he was praised by critics. Entertainment Weekly wrote of his performance in their review of the film, “For the One Direction fans wondering, Harry Styles is also solid, seamlessly blending into the ensemble.”

According to AP, the film’s director said that he “cast Harry because he fit the part wonderfully and truly earned a seat at the table.” after admitting, “I don’t think I was that aware really of how famous Harry was.”

The singer embarked on his first solo world tour in 2017, with tickets selling out in seconds. He added 56 dates to the tour as a result. Over the years, the star has become a fashion icon, whether he’s wearing jumpsuits on stage, iconic sweaters that channel Princess Diana, or gracing the cover of VOGUE.

In 2018, the singer — who has really lived up to his last name (and whose last name possibly inspired a memorable song by one of his exes) — became the face of Gucci. In May 2019 the singer-turned-fashion icon was the co-chair of the Met Gala. He wore a showstopping Gucci ensemble, complete with high waisted trousers, sheer top and pearl earring. In November 2019, Styles returned to SNL, this time hosting and performing as a musical guest. In December 2019, Styles released his second album, Fine Line, and became the first male artist from the U.K. to debut his first two albums at number one. Though Styles has plenty of (very popular) songs of his own to sing, the star has covered everyone from Fleetwood Mac to Lizzo, oftentimes leaving us wondering if the covers are an improvement on the original. As Styles’ sound shifted and began to show influences from ’70s rock like Fleetwood Mac, he made an iconic friend: Fleetwood Mac’s lead singer herself, Stevie Nicks.

In 2017, he sang alongside the legend during one of his shows in Los Angeles, the pair covering “Two Ghosts,” Fleetwood Mac’s “Landslide,” and Nicks’ “Leather and Lace.” In March 2019, Styles even served as the presenter who inducted Nicks into the Rock & Roll Hall of Fame.

Nicks said of Styles in an interview with Rolling Stone, “When Harry came into our lives, I said, ‘Oh my God, this is the son I never had.’” In 2020, Styles scored a role in Olivia Wilde’s film Don’t Worry, Darling alongside Florence Pugh (and picked up a hot new relationship as a result of his time on set), and is slated to star in Amazon’s My Policeman opposite The Crown star Emma Corrin.

Since going solo, Styles has won an American Music Award, a Billboard Music Award, a Brit Award and multiple iHeartRadio Music Awards. (He also recorded this music video with Phoebe Waller-Bridge, which counts as a win in itself.)