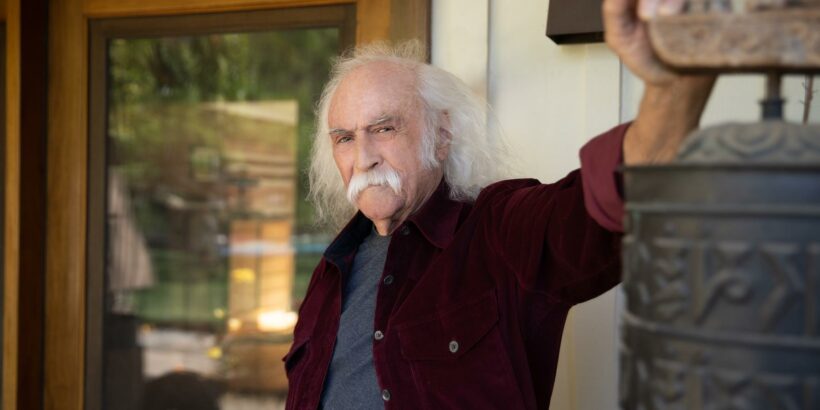 David Crosby is a longtime Steely Dan super fan; he’s called Donald Fagen one of his all-time songwriting heroes, and he lists Aja and the Royal Scam among his favorite albums ever created. But he never actually got a chance to work with Fagen until the sessions for his upcoming LP For Free (out July 23rd) where they teamed up to create “Rodriguez for a Night.”

The music was created by Crosby and his son/bandmate James Raymond, and it features Andrew Ford on bass, Dean Parks on guitar, Gary Novak on drums, Michelle Willis and Becca Stevens on background vocals, Steve Tavaglione on tenor sax, Walt Fowler on fluegelhorn and trumpet, and Raymond on Fender Rhodes, synthesizers, percussion, and synth guitar.

The song is about an insecure “drugstore cowboy” that loses his girlfriend to a cocky rival he calls “the outlaw Rodriguez.” “It was then that her heart took flight,” Crosby sings. “Well, now I’d sell my soul if I could only be/Rodriguez for just one night.”

For Free is Crosby’s fifth record since 2014. And even though the title track is a cover of a 1970 Joni Mitchell classic and Fagen helped out with the “Rodriguez for a Night” lyrics, the vast majority of the songs were written by Crosby and Raymond. The last song, “I Won’t Stay For Long,” is a sparse, haunting ballad credited solely to Raymond.

“‘I Won’t Stay for Long’ is my favorite song on the record,” Crosby said in a release. “I’ve listened to it 100 times now and it still reaches out and grabs me, it’s so painfully beautiful. I did end up getting a pretty stunning vocal on it, because it meant so much to me that I sang the hell out of it. One thing James and I both believe is that songs are an art form and a treasure — so when a song comes along that’s as good as that one, we’ll just give it everything we got.”

Crosby hasn’t played live since the pandemic hit, and he initially worried his long absence from the road would cause him tremendous financial pain and the possible loss of his house. But in March, he sold his publishing to Irving Azoff’s Iconic Artists Group, putting him on much firmer financial footing.

Crosby he turns 80 in August and has expressed concern that he may never play guitar again due to trigger-finger tendinitis in his hands. But his singing voice remains extremely strong, and he’s very pleased with the end result of For Free. “I think people are going to love the record,” he told Rolling Stone last year. “I think people are going to like the music. And that is great. That is what I’m holding onto, fiercely, to try and get through all the crazy. And there’s a lot of crazy.”