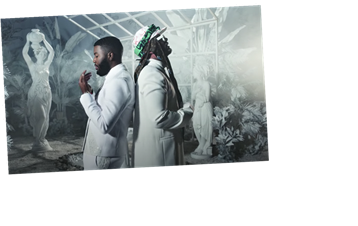 J Balvin and Khalid have released a joint single, “Otra Noche Sin Ti,” along with a music video directed by Colin Tilley.

The track pairs Balvin’s Spanish lyrics with Khalid’s English verses, with Khalid crooning, “Been in a while since I’ve seen your face/ When you know it gets lonely in LA/ Thinking of you every day/ Say the word I’m on a one way.” The monochrome music video, set in a foggy forest, brings the singers together for the soulful song.

Ahead of the video’s premiere, Balvin and Khalid appeared on YouTube series “RELEASED” to discuss their creative process and how the two originally met via Twitter.

Last month, Balvin unveiled single “Tu Veneno,” which comes off the Colombian star’s upcoming fifth album. His new album is the follow-up to last year’s Colores. A release date has not been revealed, but Balvin told Rolling Stone that it’s coming “soon.” “This new album is all about me,” Balvin said. “It’s the first time I’m going to talk about personal stuff. I’ve never done that before.”

Balvin will also release a song for The Pokémon Company’s 25th anniversary compilation album, out this fall.

Khalid’s most recent release was a collaboration with rising singer-songwriter Watts for a new take on the latter’s 2018 song, “Feels.” His most recent album, Free Spirit, arrived in 2019, and last year he dropped a solo song, “Eleven,” (the remix boasted Summer Walker) plus a few collaborations, including “Know Your Worth” with Disclosure, and “Be Like That” with Kane Brown and Swae Lee.