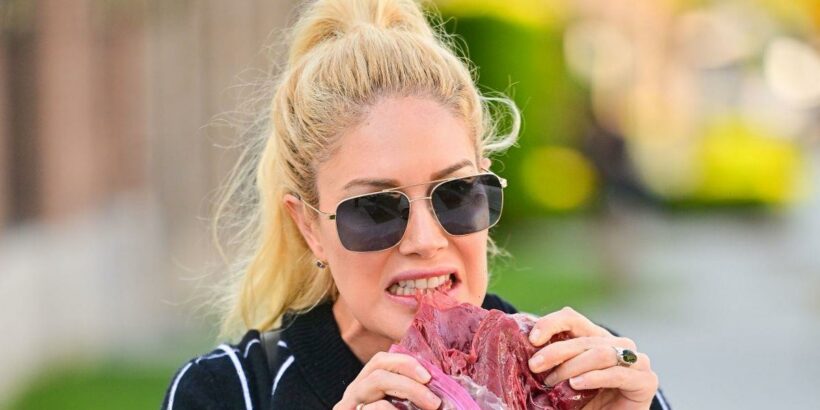 The Hills star, 35, was seen tucking away at a raw bison heart on the streets of Los Angeles Pacific Palisades neighbourhood as she went about her daily errands.

Heidi has been following a raw meat diet lately in the hopes of conceiving her second child with her husband Spencer Pratt after discovering Paul Saladino, also known as the 'Carnivore MD'.

While some may opt to sit down to eat their lunch, the Celebrity Big Brother star proudly walked around snacking away.

Much to the confusion of onlookers, Heidi pulled her slab of raw meat out of a zip lock bag before proceeding to chomp down on the fatty flesh.

Despite chomping on raw meat, she kept a casual look opting for a black cardigan and a simple pair of black jeans held up with a bold Gucci belt.

Her signature blonde tresses were styled into a high ponytail, swept off her face, while she rocked a pair of oversized sunglasses.

This, however, is not a new thing for Heidi who began documenting her raw meat journey back in January of this year.

Taking to social media, she shared a clip of herself cutting raw bison liver with a pair of scissors before tucking into the questionable delicacy.

She said: "Maybe this will help me get pregnant."

While eating raw meat is not recommended, Heidi claims it has boosted her libido as she hopes to get pregnant again.

She told People: "I have been trying to get pregnant for over a year and a half, I'm willing to try different things, it's a great source of nutrients.

"I have felt incredible on this diet a lot more energy, clarity, increased libido, and overall improvement on chronic pain I have had."

However, she doesn't worry about the risk of eating raw meat, claiming it is similar to "eating raw sushi", adding: "I just happen to like eating sushi-style organs."

She went on to tell the publication: "When you think about where the most nutrients are that are bio available to humans without toxins, irgans are very nutritious parts of animals. Culturally organs are a critical part. Eating raw liver is going to preserve as many nutrients as possible

But her husband Spencer isn't too fond of the diet, explaining: "Heidi's built differently, she can really eat this stuff, I can't."

Eating raw meat is not recommended due to the risk of contracting infections such as Salmonella and E. Colo which can leave the victim extremely unwell.

Symptoms including vomiting, diarrhoea, abdominals cramps, a temperature and a headache can last up to seven days.