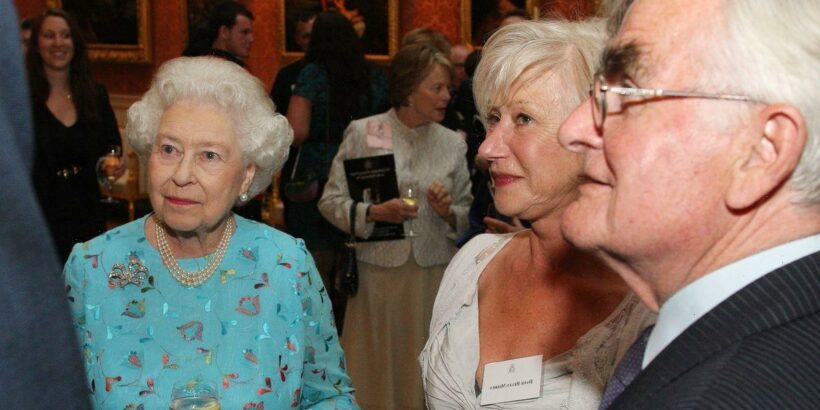 Actress Dame Helen Mirren took it all in her stride when she appeared as Queen Elizabeth I at the live Sunday night extravaganza at Windsor to celebrate Her Majesty The Queen’s Platinum Jubilee.

However, she hasn’t always been so confident when mixing in royal circles.

The 76-year-old national treasure admits she felt anxious around the monarch and went without milk in her cup of tea when she was invited for afternoon tea with The Queen.

Dame Helen, who won an Academy Award in 2006 for playing the monarch in the biographical film The Queen, was expecting to be one of the dozens of guests but found herself stuck for words in a group of just eight around the tea table.

Speaking at a Helen Mirren and Hawk Koch Discuss The Magic of Movies’ event in 2019, the actress revealed that she’d found herself completely out of her depth in such an intimate crowd.

“She invited me for tea. I’ve met her once before and it was in a room with 200 other people,” recalled Helen.

“So I said, ‘Oh well I can manage that.’ So it was at the horsey place and the message came to me that the Queen would like to invite you to tea, she knows you’re here.”

Entering the room to find The Queen, the late Prince Philip, “a Sheik of somewhere or other and a couple of horsey people”, she fought rising terror while trying to make polite conversation and knowing nothing at all about horses.

Forgetting all the genteel etiquette she’d ever learned, Helen couldn’t remember the correct way to address Prince Philip, or whether it was OK to ask him to pass her the milk, which is how she ended up with black tea.

“The milk is on the other side of Prince Philip and I want some milk in my tea, but my brain goes completely dead and I cannot remember how to address Prince Philip,” said Helen, who was uncertain whether it should be Sir, Your Highness, Your Majesty or something else entirely.

Then she wondered if it was rude to ask him to pass the milk “or should I just ask for a lackey?”

“I finished up not having any milk. I just couldn’t sort it out,” the actress admitted. “ It’s a lesson in embarrassment, but they were lovely, they were utterly gracious.”

For more of the latest showbiz news for Daily Star, make sure you sign up to our newsletters here.