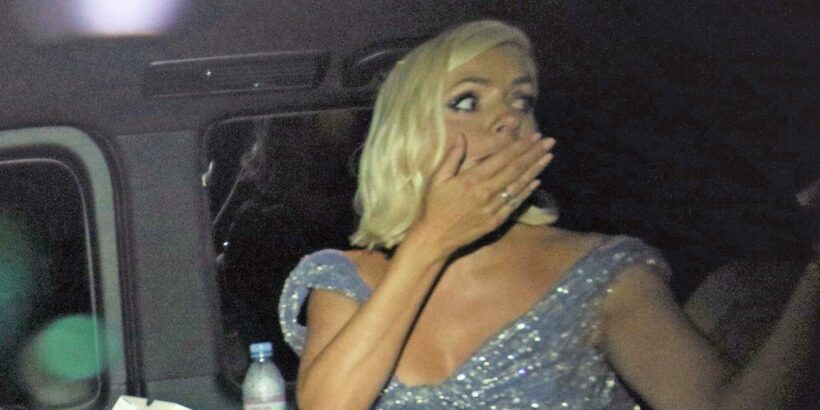 Holly Willoughby celebrated This Morning's big NTA win by grabbing a late night box of donuts and a bottle of gin before heading home from the boozy after-party.

The 40-year-old presenter picked up the gong for best daytime series alongside her This Morning colleagues at the awards show on Thursday evening.

The celebrations continued long after the ceremony itself, as Holly and her celeb pals enjoyed the festivities at the follow-up event until the late hours.

Holly was pictured leaving the after-party alongside a friend around midnight.

In the car, she tucked into donuts and a secret bottle of gin she had sequestered for the ride home.

The former Celebrity Juice panellist looked ravishing in the jewel-encrusted Ziad Nakad dress she had worn to the earlier event.

Holly teamed the plunging gown with a pair of Gina heels and a gold bangle from London jeweller, David Morris.

She wore her blonde hair short and swept elegantly back from her face.

Leaving the after-party, Holly rested the box of donuts in her lap as she chowed down on the fried food item following a successful night.

Earlier in the day, she had cried live on air while talking to Kate Garraway about her husband Derek Draper, who is currently battling complications from coronavirus.

In the show's victory speech, Holly said: "This Morning is an incredible team. we are just lucky to be one cog in the wheel.

She added: "It's an abnormal world and we just wanted to give you a normal morning.

"Thank you for voting. It means the absolute world. Thank you."

She also posted to Instagram earliter today (September 10) to celebrate the win.

Alongside a picture of the This Morning team in an "obligatory lift selfie", she wrote: "Waking up with a full heart this morning.

"Thank you once again. We love making this show and to pick up this award means so much to the whole team.

"Congratulations to everyone at @thismorning … huge love."