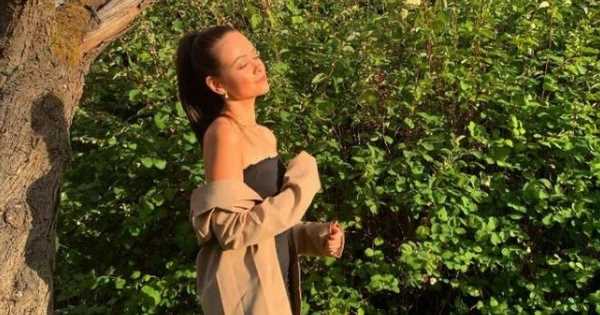 Hollyoaks' Niamh Blackshaw has certainly made a splash since entering soapland.

The stunning actress, 23, first captured attention back in 2017 when she nabbed the part of Lara Cutler in Coronation Street.

The following year she was cast as Juliet Nightingale in Hollyoaks, the role that has really helped her to make a name for herself.

The brunette has built up quite a fanbase thanks to Juliet's antics on the Channel 4 show.

And she is also starting to draw a lot of fans on Instagram, with 120,000 people following her in the hope of getting glimpses of her life.

We take a look at some of her hottest snaps.

Niamh sent her fans into a bit of a meltdown when she shared a shot showing her soaking up the sun in a teeny black minidress.

The picture showed the star posing by a tree in the skimpy dress, black boots and a beige shirt that had slipped off her shoulders.

Her long brown hair was pulled back into a sleek, high ponytail and her eyes were closed against the sun's rays.

"The sun was too bright for my weak lil eyes x," she wrote.

Fans said she was "stunning" and that she looked "absolutely gorgeous".

"You're too hot for my eyes had to close them," quipped one of the star's admirers.

Niamh's fans were wowed by her chic style when she shared photos of her strolling around Paris earlier this year.

One shot showed the star clad in a brief red skirt, black tights and towering black boots that made her legs go on forever.

The actress wore her hair loose over her shoulders and pulled on a floor-length black coat as she headed out for a spot of sightseeing.

"So beautiful," one person posted in the comments section.

Another wrote: "This outfit was made for u!!"

One fan said the star was "too beautiful for words" after she shared an incredible close-up of her stunning face.

The picture showed Niamh with her face in the sun and her brunette locks spilling loose around her face.

The actress's skin glowed and she had slicked on an orangey-bronze lipstick.

Her blue eyes were framed by mascara-coated dark lashes and looked mesmerising as she fixed the camera with a steamy stare.

Niamh racked up more than 15,000 likes with one image that showed off her endless legs in a tiny white tennis skirt.

The TV star teamed the little skirt with a rust-coloured body and threw a brown jacket over the top.

Her hair was completely straight and she wore it swept over to one side as she snapped a mirror selfie.

"Sexy!!" declared one of the actress's followers, while another said she was "shhhhhmokin!"

Stylish at The Ivy

Niamh showed she could rock a pair of jeans when she slipped into a pair of skinnies for a meal at The Ivy.

She looked incredible in the tight trousers, which she wore with a black blazer and a black crop top that showed off a sliver of toned tummy.

The brunette completed her polished look with some black heels and tied her hair back into a tidy pony.

Dangly hoop earrings caught the light as she turned to the side for the elegant shot.

Another person said the actress was the "prettiest girl I've ever seen".