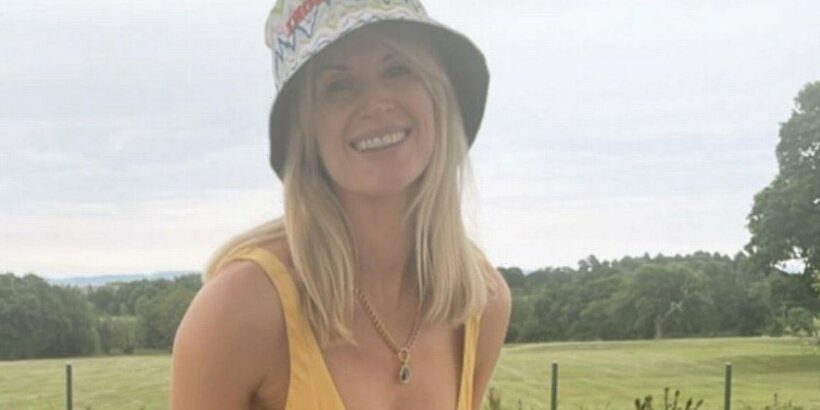 Former Hollyoaks star Sarah Jayne Dunn caused controversy when she was unceremoniously dropped from the Channel 4 soap after relaunching her career on OnlyFans.

But now the former actress seems to have put this behind her as she took to Instagram to show off her slender figure.

The 40-year-old shared snaps of her new banana coloured swimwear on the social media site as she basked in the sunshine on a countryside getaway.

Sharing the pair of pics, Sarah showed off her toned abs and gave a peak at her small tattoos in her bold swimsuit as she relaxed in her plunging two-piece suit .

It’s well known the star is a fitness fanatic as she complimented the plunging yellow ensemble with leopard print sandals and a Mayan-style bucket hat as she made the most of the English sunshine.

Sarah captioned the post: 'Weekend (Thursday) anniversary (it was in May) vibes.' as she documented a belated celebration with husband Jonathan Smith.

The pair have been married since 2018 and they retreated to the countryside for a romantic trip, but the OnlyFans star couldn’t help but give a glimpse of her incredible physique as she was enjoyed her picturesque surroundings.

The couple share a 5 year-old son, who was present when the pair wed at The Holford Estate in Cheshire.

This comes after the former actress was unceremoniously axed from Hollyoaks after joining sexy subscription service OnlyFans.

The 40-year-old sensationally departed the Channel 4 show over a dispute when she refused to relinquish her account on the adult-only site.

Dunn played Mandy Richardson in the long-running soap opera and was involved in several storylines including the suicide of her brother, dealing with childhood sexual abuse and her on-off relationship with Tony Hutchinson, played by Nick Pickard.

Throughout her career, the blonde bombshell has been appearing in glamour shots, and she made the move to join the service as she wanted to control her own content.

The star was known for previously posing as a men’s magazine favourite, but she wanted to reclaim her image and control her money.

The former actress previously noted on Instagram: “now it’s because I want to, financial gains controlled by me and go to me. The control, power and decisions made by me.”