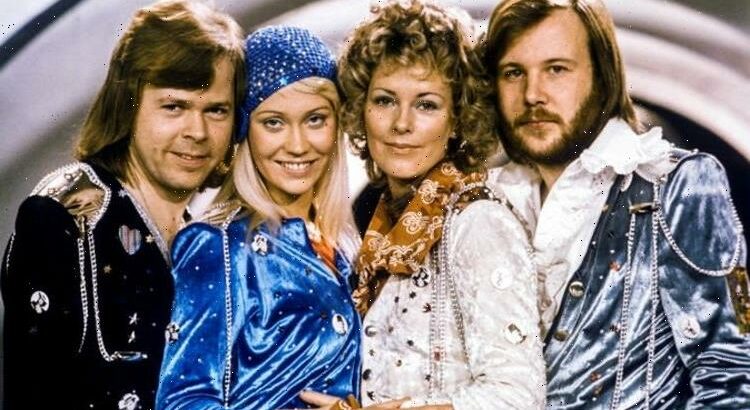 Folk act the Hootenanny Singers, featuring Björn Ulvaeus, knew all about Sweden’s top group The Hep Stars, with singer Benny Andersson, but had never met. Björn’s band were on their way to the event, while Benny’s had already played and were off to another gig. Stopping to say hello, the Hootenanny Singers invited The Hep Stars to a party that night – a send-off bash before they did a year’s national service.

“We never really expected them to come, because it would be quite a drive for them,” Björn remembered. But never ones to miss a party, The Hep Stars had every intention of showing up. But they misheard the name of the town and ended up 150 miles away. When they realised their mistake they drove all the way to the other town and arrived at 2am to find the party still going strong.

The young musicians hit it off immediately. Most importantly, a special bond was forged between the two songwriters in the respective groups. Björn and Benny ended up with two guitars, sitting on a park bench playing Beatles songs until dawn. Both had ambitions to become successful songwriters, like John Lennon and Paul McCartney.

“All we said at the time was, ‘Perhaps we could try to write something together at some point?’” remembered Benny.

The chance came three weeks later, during a break from the military. After several hours in Västervik, where Björn’s family lived, the pair completed the melody for a song they called Isn’t It Easy To Say. Björn had an idea for lyrics, and Benny took it on himself to finish them later. It was the very first Andersson/Ulvaeus composition.

Born in 1945 on the island of Hisingen, the home of Volvo, Björn demonstrated his business acumen from a young age when, aged around six, he tried to sell his younger sister to one of the men working at the local shipyard because he was tired of the toddler hanging around him.

On his 13th birthday, Björn got his first acoustic guitar but his mother Aina did not enjoy his early playing. “I would put on my coat and get out of the house, just to avoid having to listen to it,” she said.

In high school, he joined a band called The West Bay Singers, which in 1963 entered a radio talent contest. One of their rivals was a 17-year-old singer called Anni-Frid Lyngstad.She was the child of an illicit liaison between 18-year-old Norwegian girl Synni Lyngstad and a 24-year-old German sergeant called Alfred Haase, a married man, stationed in Norway during the war. Alfred won Synni’s affections with a 2kg sack of potatoes, a scarce commodity in 1945.

Alfred reportedly knew his lover was pregnant before he shipped out and promised to return, but he claimed later that he had no idea and his letters to Synni went unanswered. By the time Anni-Frid was born in November 1945, Synni was an outcast, shunned by locals for having an illegitimate child by a German.

To give Synni a chance to rebuild her life, her mother Anni took the baby to live in Sweden. Devastated Synni struggled to cope and followed them over the border a few months later but in 1947, she died from kidney failure, aged 21.

Anni-Frid found comfort in music and, at 13, adopted the nickname Frida and began singing. At 16 she joined Bengt Sandlund’s big band, a popular local dance outfit and fell in love with trombone player Ragnar Fredriksson, four years her senior.

In January 1963, aged 17, she gave birth to a son, Hans. She and Ragnar married a year later and a daughter, Ann Lise-Lotte, arrived in 1967.Benny Andersson was already a gifted keyboard player at 15 when his girlfriend, Christina Grönvall, fell pregnant.

They got engaged and in August 1963 she gave birth to a boy, Peter. Benny, still only 16, gave up his engineering apprenticeship. He and Christina joined a folk group, while he sold domestic appliances door-to-door.

When that group folded he considered going back to school, but was invited to join rising pop act The Hep Stars. As the band achieved national fame, Christina gave birth to a second child, Heléne, but Benny’s private life was kept secret from adoring fans, and in 1966 they broke up.

In March 1969, Frida was trying to make it as a solo singer.

Entering the Swedish selections for the Eurovision Song Contest she came fourth, but briefly met Benny Andersson who was there collaborating with singer and songwriter Lars Berghagen. The pair’s song, performed by a singer called Jan Malmsjö, came second.

A few days later they bumped into each other in a restaurant in Malmö, with other musicians, including Björn. They all went back to Björn and Benny’s hotel and when Frida left later that morning she felt like she had known Benny all her life.

Likewise, Benny was charmed by the attractive brunette with the infectious laughter. He was still in a relationship with his Norwegian girlfriend, Anne, but couldn’t resist the temptation of a brief fling with Frida. “I was in love with him already,” Frida admitted, “but it took some time before he felt the same about me.”

For Björn, another chance meeting in 1969 was to change his life. He was taking part in a TV special when he first spotted Agnetha Fältskog, a stunningly beautiful singer who’d enjoyed chart success in Sweden. He later said he fell in love the first time he heard her sing.

Filming one sequence, he seized his chance to grab hold of her hand. “That’s when I knew there was no going back,” she said. The following morning he was half an hour late to film a solo song but when the crew couldn’t locate him someone suggested trying Agnetha’s room. After much banging on her door it finally opened just slightly and a dazed Björn peeked out.

The red-faced singer was down at the location in a flash, and nailed his song in one take. By the time the television special was finished, Björn and Agnetha had become a couple. Soon they were close friends with Benny and Frida, who had moved to a small apartment in Stockholm, making the heart-wrenching decision to leave their children with their ex-partners, to focus on their music careers.

They supported each other when others passed judgment on them for the way they had “abandoned” their families.

On April 5, 1970, Agnetha’s 20th birthday, the two couples left for an 11-day holiday in Cyprus. Björn and Agnetha got engaged there but the trip was significant for another reason.

For the first time they all played and sang together – and were astounded at the results. On a whim, they played live for United Nations soldiers stationed on the island. They went down a storm, and an idea was born. They began touring and the following year Agnetha and Björn married.

When news leaked of the wedding, every available police officer was required to control the 3,000 fans who turned up. In the chaos, a horse stood on the bride’s foot but, while Benny played the Wedding March on the church organ, the ceremony went ahead.

At the start of 1972, both couples had moved into brand new terraced houses in the Stockholm suburb of Vallentuna and recorded under the name Björn & Benny, Agnetha & Anni-Frid. After several unsuccessful attempts at becoming Sweden’s entry to the Eurovision Song Contest, Benny and Björn thought they were on to a winner with a song called Ring Ring. Although the song became a hit – the Swedish and English versions at number one and two – it only came third, so they resolved to try again.

In February 1973, Agnetha gave birth to a daughter, Linda, declaring it “the happiest moment of my life”.

Before their next assault on Eurovision, manager Stig Anderson wanted them to change their name to the catchier ABBA – also the name of a seafood company – but Benny and Björn thought the name “smelled of canned fish”. A newspaper contest to find a name for the band produced suggestions like “Alibaba, Baba and Friends and Neighbours”.

Admitting defeat, the boys agreed to ABBA. Stig called the fish company for its approval, which the owner gave, on the condition the group wouldn’t discredit his company. The first records credited to ABBA were the British and Italian Ring Ring singles, released in October 1973.

Manager Stig came up with the idea after searching in a book of quotations for a three-syllable word to fit Benny and Björn’s melody.

The Dome in Brighton was chosen as the venue for the 1974 Eurovision Song Contest on. By a spooky coincidence, ABBA were booked to stay in the Napoleon suite at the elegant Grand Hotel. They took the contest by storm, but despite not scoring any points with five countries – including Great Britain – won with a fairly low score of 24 points.

When it was time to crown the winners, Björn and Benny were blocked from the stage by security guards who insisted that “only the composers are allowed” and thought they were just the performers. Benny eventually managed to fight his way past, but the guards absolutely refused to let go of Björn. He was finally allowed on stage when it was time to perform the winning song again.

While ABBA basked in their triumph, not everyone back home was happy. Some people reported Waterloo to the performing rights society for plagiarising The Foundations’ 1968 hit, Build Me Up Buttercup.

While Björn and Benny dismissed the comparisons, a Swedish reporter condemned the band for making light of a battle in which 40,000 people died.

None of it mattered. ABBA partied until 6am. Björn remembered, “I thought to myself, ‘My God, yesterday we were an unknown group and tomorrow the whole world lies open for us. We’ve become famous overnight.’”