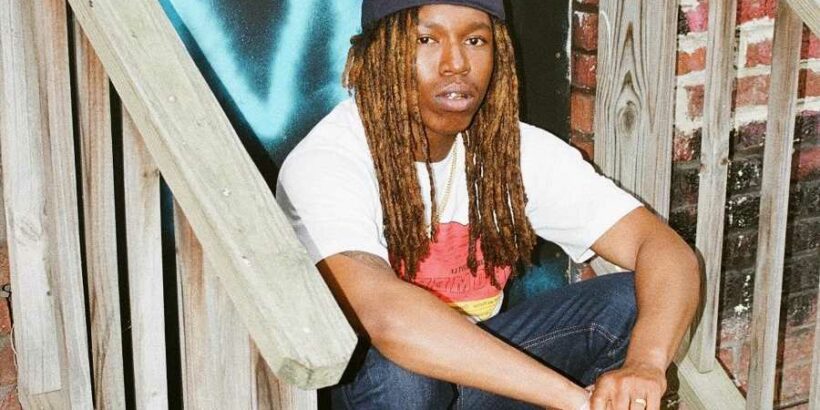 At his leisure, the musician Mavi plays with space and time. The 21-year-old rapper from Charlotte, North Carolina sees storytelling as a way to speak his truth while he’s alive. His latest EP End of the Earth was released to critical praise and marked a significant step towards what could be a major sophomore album from the rising star. The EP’s cover art takes after Shel Silverstein’s Where The Sidewalk Ends, and the metaphor tracks. End of the Earth features Mavi’s sharpest lyrical skill melded seamlessly with shapeshifting lo-fi sonics. “I can’t write all the time ’cause I can’t lie/ I put a price on this shit ’cause it’s all mine,” he raps as a commandment on opening track “Time Travel.” It’s a clear-eyed missive about who he is and who he refuses to be. If we’re to understand End of The Earth as a stop along the road to Mavi’s upcoming sophomore album Shango, which he’s been teasing for several months now,  then it tells the story of an athlete training their hardest in the offseason.

But sports metaphors only tell part of the story. Mavi cites the world-renowned afrofuturist, composer, and poet Sun Ra as a critical influence on his passion for neuroscience and poetry. Sun Ra’s philosophy of calling his poetry equations reflects in the almost scientific rigor at the core of Mavi’s music. “[The album-making process] is an alternation between me establishing or exploring something that is calling me,” he explains over Zoom. “And sharing the lessons out, because I get really excited about listening.”

After locking himself in the studio for nearly a month earlier this year, Mavi says he had something to prove to himself. “It was like a reset and that shook up my artistic confidence,” he explains. “I was like, Fuck it. I’m dropping, I have to show myself … I owe it to myself.” Mavi returned to his hometown of Charlotte as a way of reconnecting with a truer vision of himself. He says the city “allowed me to look back at myself in a way that would make my younger self happy.”

Despite being the largest city in North Carolina, Charlotte is only known for a handful of artists —  DaBaby, Lute of Dreamville, and Deniro Farrar, to name the most prominent. Mavi wants to change that, and building a community for more acts to come from the city is central to his work. Despite sharpening his skills as a musician while he was a student at Howard University, he has long been a household name in the deepest corners of Charlotte’s hip-hop scene. As a teenager, he was a member of the rap collective Killswitch alongside his friends and creative collaborators Messiah, Ahmir the King, and Sscopack!. Before leaving for college, Mavi had two mixtapes under his belt, 2016’s Beacon and 2017’s No Roses, and he knew he had to make something of his gift.

His 2019 debut Let The Sun Talk was a triumph and placed the rapper firmly alongside the likes of Earl Sweatshirt, MF Doom, and MIKE. His deeply introspective and metaphysical style fits naturally with a rising group of young MCs bringing a more experimental sound to modern rap. On End of The Earth, producers Aloisius, Isaac, Nephew Hesh, and Keem The Cipher build a sonic atmosphere that informs the inquiries inherent to Mavi’s storytelling. On standout track “Methods,” haunted chords conspire with Mavi’s distinct vocal register to give the listener a sense of impending gloom. But the song’s production is more nimble, hovering around a drop that never quite arrives. Instead of beating you over the head with a sentiment, Mavi is asking us to think critically about being present. About the finite reality of our time on earth. “Hardly see the pеople who inspire shit to do now / Partly hid the grit required to just put your whole life up behind you,” he confesses.

The only voices other than Mavi’s on the EP are from his elders. Whether it’s a voicemail recording of his grandmother or audio from a North Carolina OG named Honeyboy. They’re either making sure Mavi eats or giving in-depth advice about how age can shift the way you approach conflict. Young black life in America is full of these types of momentary glimmers of adulthood. When the world’s view of you forces wisdom beyond your years. Mavi manages to tap into a kind of familial gentleness that melts away the dread of an impending rapture. As our conversation comes to a close, he speaks at length about how every black woman in his family has been critical in his own identity, and about his love for black liberation struggles.

As Mavi prepares his sophomore album, he’s centered on the family and city that raised him. Before we even get into the intricacies of his work, we commiserate on sharing the same hometown — the schools we attended and the various pushes and pulls that keep us so passionate about a city that few see as a beacon of musical genius.  “We’re accounted for in every sense of the word,” Mavi says, glaring into the falling sun.