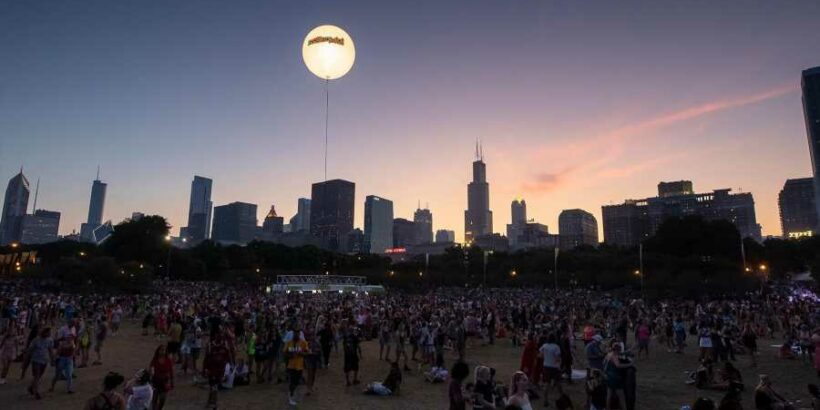 Lollapalooza is set to take place this week despite an uptick in Covid-19 cases and growing concern and criticism, including from a prominent Chicago infectious disease expert. So just how safe is it to attend? The answer is complicated.

The annual summer festival, which hosts around 100,000 attendees each of the four days of its run in Chicago, makes its return to Grant Park July 29th through August 1st. When the festival was officially announced in mid-May, attendance safety guidelines were put in place, but those guidelines have shifted over the last few months. At first, the fest required proof of full vaccination or a negative Covid-19 test taken 24 hours before each date. Now, however, festgoers need only provide a negative Covid test taken within 72 hours of showtime. The festival also requires unvaccinated attendees to wear a mask, but, once fans are inside the gates, that could likely be difficult to enforce. There is also the possible issue that attendees can obtain fake vaccination cards. It’s unclear how organizers will determine the validity of vaccination proof.

Some festgoers have also balked at the “Lollapalooza Fan Health Pledge,” which, like masking,  relies on the honor system. The pledge includes asking those who test positive or have been exposed to Covid-19 14 days prior, have Covid-19 symptoms 48 hours prior, or have traveled to any international territory or other area requiring quarantine by the state to abstain from the festival.

Concerns about the festival heightened early last week following travel advisories set forth in Chicago due to the recent rise in cases. Additionally, news broke that at least 1,000 cases were connected to a festival in the Netherlands, as CNBC reports. The two-day Verknipt outdoor festival was held in Utrecht in early July. Attended by 20,000 people, that fest had similar requirements to those mandated by Lollapalooza: proof of vaccination or a negative Covid test. Verknipt attendees were able to take tests as many as 40 hours prior, and fans could also attend if they had recently had a Covid infection.

While some questioned whether Lollapalooza should be canceled, last week Mayor Lori Lightfoot stood by her decision. During a July 20th press conference, nine days before bands are slated to take Lolla’s stages in Chicago, Lightfoot expressed concerns about the uptick, but she reiterated that even if the decision to hold Lollapalooza was made that day, she would have still given organizers the go-ahead. Lightfoot’s office did not return a request for comment about whether cancellation or changes to health protocols were on the horizon. A source connected to the event told Rolling Stone that the festival would go on as scheduled.

Although the festival is still scheduled to take place and protocols have largely remained the same, on Tuesday, Chicago Department of Public Health Commissioner Dr. Allison Arwady announced another nine states have been added to the city’s travel advisory, which requires that those entering from those states get a negative Covid test or quarantine upon return to the city; those that are vaccinated are exempt. Alabama, Alaska, Arizona, Kansas, Mississippi, Oklahoma, Tennessee, Texas, and Wyoming were added to the list. Chicago also recently added Missouri and Arkansas to its travel advisory, as well as Florida, Louisiana, and Nevada, and the U.S. Virgin Islands. As of Tuesday, cases in Chicago are up to 165 per day, representing a 76 percent increase over last week, as NBC5 notes.

When Dr. Arwady was asked on Tuesday if she was confident that Lollapalooza would not become a super spreader event, she said she couldn’t promise there wouldn’t be any cases associated with Lollapalooza, but added that she was hopeful that “we won’t see a significant problem.” She stressed that the fest is held outdoors and has safety protocols in place, adding that the guidelines changed to 72 hours because it’s a “more typical standard all around the country.”

On Monday, however, in a conversation with The New York Times, Lightfoot said Chicago could reinstate a mask mandate along with other Covid-19 safety precautions if the city continues to see a rise in cases. Still, she added, “We’re not there yet,” and the threshold would be 200 cases a day. “If we start to see consistently going over that, we’re not only going to look at a mask mandate, we’re going to look at other tools we’ve been compelled to use.” Chicago is currently on track to hit that benchmark within the next few days, Arwady said on Tuesday, but she declined to say whether a mask mandate would be reinstated should the threshold be met, saying they would take into consideration all the data.

That same day, Dr. Emily Landon, executive medical director for infection prevention and control at the University of Chicago Medical Center, warned that the festival could become a “spreader” event. “I think a lot of people are going to get Covid at Lollapalooza,” she said, via NBC5. “The real problem is not so much that a bunch of young people who come into Chicago getting Covid at this event. The real problem is them taking it back to places that have very low vaccination rates.”

Landon also criticized the 72-hour requirement and said if the fest adjusted its protocols, it could be a much safer environment. “I honestly think vaccinated individuals are still at pretty low risk, and even if they do get Covid they’re not likely to have (symptomatic cases). If all of this were to happen with fully vaccinated individuals and very few individuals that were unvaccinated but had tested negative, that and slightly lower capacity, this would be a fine event to have, even in the midst of delta increasing,” she said.

Lightfoot dismissed Landon’s assessment, saying the physician is a “critic standing on the sideline” and added that Dr. Arwady and other experts have vouched for the safety of the Lollapalooza health protocols. “It’s outdoors. We’ve been having large-scale events all over the city since June without major problems or issues,” she said. “The Lolla team has been phenomenal. They’ve hired their own public health experts who’ve been working hand in glove with us since we started these discussions.”

During Lightfoot’s press conference last week, she addressed concerns about holding the festival and doubled down on her decision to give the event the green light. “I think we made the best decision that we could, as always, based upon the data and based upon projections and modeling,” she said. “I feel like we made the right decisions, but we’re sounding the alarm today because we’re starting to see this uptick.”

At the time of last week’s press conference, the Covid positivity rate in Chicago hit 1.5 percent, which met the city’s definition of controlled transmission risk. However, that number was up from a low of 0.4 percent in June.

Arwady backed the mayor’s stance during last week’s presser, saying that she expected the “great majority” of attendees to be vaccinated and that they would be monitoring Lollapalooza as they would “any other gathering.” Lightfoot said that though there are concerns around variants, particularly Delta, she stressed that the worst-case scenario is “entirely preventable” due to three vaccines being readily available.

Arwady added that anyone making or buying a fake Covid-19 vaccination record card would be violating the law, per the FBI. “We’re looking forward to Lollapalooza. The great majority of folks who are coming we expect are vaccinated. And we’re doing everything we can to make this as safe as we can,” she said. “But if you are not vaccinated, you also need to wear a mask in that setting.”

When asked if additional health protocols, such as masks, would be required during Lollapalooza in light of the uptick, Arwady said that the current requirements were sufficient. “Vaccination is the best way to safely enjoy this event,” she said. “But to require the vaccination or a negative test is really the best option that we have available at this point. It really is.”

“And I think with the level of Covid that we have here, we remain here in Chicago right now at this low to even controlled risk state. I do expect that it will go up. But we do the best we can in terms of trying to protect against Covid and this is the absolute best thing that can be done,” she continued. “For people who are unvaccinated I’d certainly recommend masking and anybody who’s concerned, I would encourage them to choose to mask, but there’s not a need to recommend universal masking at this point.”