Conrad Sewell is pushing his sleeves up to show me his tattoos.

To be fair, I did ask him, as they are not the usual musician’s carry-on, but images of the Virgin Mary and the Infant Jesus of Prague. Not quite rock’n’roll, more your Sunday best. 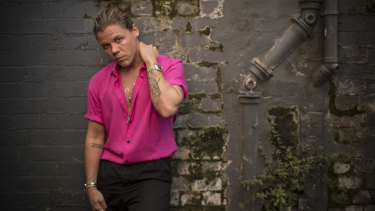 Conrad Sewell was nearly brought undone by drugs and alcohol but the singer is ready for a second chance. Credit:Wolter Peeters

“Sunday for me was at church with my family,” he says. “I went to an all-boys Catholic school, it was just a part of my upbringing. It gave me some kind of moral compass in life, which later shifted a little bit.”

Well, we’ve all got to start somewhere.

“But it gave me a good set of rules to live by,” he says, laughing.

Sewell is sitting in the offices of Sony Music in East Sydney serving out his penance in an effort to right a music career that has tipped off balance.

At 31, the Brisbane singer has a string of successful singles to his name, including the 2015 ARIA song of the year Start Again and Firestone, the “tropical house” (a strand of house music, not a fern) chart-stomping collaboration with Kygo. He’s played Madison Square Garden, Coachella and Glastonbury, toured with Ed Sheeran and Maroon 5, too, but despite these outward markers of success, things haven’t quite gone to plan.

There was heavy drinking and drug use, and he is now on his third record label. A particularly bad bender ended with his mum on the phone in tears begging Sewell to pull himself together.

So he has, after a fashion – he calls himself a work in progress – and it’s now, almost four years since that ARIA award, that he finally has a full-length studio album to his name and questions to answer.

Usually, those questions are about the drinking and drugs – and you can see him tense up because he knows they’re coming – so we’ll start somewhere else: religion.

“My grandfather, who was sort of the leader of the family, he was the most religious out of everyone, so when he passed away I got my first tattoo, which was this one,” Sewell says pointing to a picture on the inside of his left wrist.

“My grandfather always used to attach a prayer, the Divine Mercy, to all my birthday cards, so that’s sort of like an ode to him. It’s a Les Paul Gibson guitar, which is the first guitar I ever got, and the Divine Mercy and angel wings to guide me through my music career. I got that when I was 17.”

He now has 12 tattoos on his arms, including images of the Immaculate Medal, which he also wears strung around his neck, and his patron saint – the Infant Jesus of Prague.

“For me, it’s reminiscent of family,” he says. It’s not that I agree with everything the Catholic Church does, this is my family. It’s like when people get tribal tattoos.”

Like anyone who has grown up Catholic, Sewell’s upbringing has the familiar markers of church on a Sunday, convoluted confirmation names (take a breath for Conrad Ignatius Mario Maximilian Sewell) and hymns stuck in your head a decade after you last sang them at Mass (his go-tos are The Lord is My Shepard or Shine Jesus Shine).

Surely he was in the church choir then?

“I was in the school choir,” he says. “At church we would stand at the back. It wasn’t very cool to be in the church choir, it wasn’t a very good church choir.

“It definitely wasn’t American gospel standard, which is all I wanted to sing in, so we would sit at the back of the church and try and outsing the choir – me, my sister, my brother and my mum – and get in trouble from my dad for laughing at the back of church.”

Music runs in his blood – his grandparents toured with the Bee Gees and younger sister Grace had a hit in 2015 for her cover of the Lesley Gore song You Don’t Own Me – and it was mum who got him in a recording studio when he was just 10 years old.

“We recorded this rough demo and started sending them out to label people,” he says. “We didn’t really get any reactions, it was more so I had my voice on tape and an experience of being in the studio," Sewell says.

“I think I [originally] told that story because I was trying to explain from day one, I wanted to be a rock star. It wasn’t just singing for me, it was, you know, world domination of the music charts.”

That’s quite a lofty ambition for anyone, let alone a 10-year-old.

“Well, yeah,” he says. “That was the kind of thing my mum instilled in me and my family. I believed straight away that I was capable of winning a Grammy one day.”

OK, so that hasn’t happened. But here’s the thing about Sewell, for all his swagger – and there is a lot, which he checks often with asides such as, “This is going to be most arrogant article I’ve ever done” – he is very self-aware, of his place in the music industry and in the public eye.

He’s happy to admit most people probably don’t know his name, even though they’d recognise his music and that he is, essentially, pressing the reset button on his career. 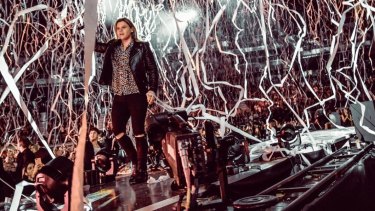 Conrad Sewell on stage in Madrid while on tour with Kygo.

“I’m still at a building phase, which is what makes me hungry for so much more,” he says. “It also makes you question yourself at this point: ‘Why hasn’t it happened yet? Am I still the only one who believes it’s going to happen now?’ But that’s just me being an artist and being insecure about things.”

He moved to the UK after a failed audition for season two of Australian Idol and spent time in Stockholm and Berlin working with songwriters. He then started a band, Sons of Midnight, but after some moderate success in Europeand tales of epic hijacking-limos-in-Paris levels of partying, they disappeared after one album.

“I was travelling the world with my four best mates,” he says. “We thought we were the Rolling Stones – rock’n’roll, drinking, partying – so we would be like, ‘Let’s smash every beer on the rider and then go out there and play.'

“And then I did that for so long, that it started to affect me. I didn’t realise it was. And then I moved to LA and that brought a whole load of other things into it and … you know.”

While the move to LA brought him the kind of recognition he had been craving – the 2014 hit Firestone and 2015’s Start Again saw him touring worldwide with a profile to match – but, again, the drinking was catching up with him.

“The thing with me was that I could always get away with it, because my voice was resilient and I was used to drinking all weekend and then singing at the pub for three hours, even if I’d just vomited around the corner an hour before,” he says.

“So for me to get up and sing Firestone at Madison Square Garden, f—ed up, was a pretty easy thing for me to do.”

Does he remember the gig?

It was the eventual pleadings of those closest to him that made him reconsider what he was doing.

“My girlfriend really helped me and I don’t like to talk about her too much, because she remains a secret,” he says.

“She saw me in states – she was arguing with me at Madison Square Garden, she was with me on the road when I couldn’t get up for shows, she saw everything – and I think she saw how great I could be and she saw me ruining that, and eventually I lost her.”

His mother, for so long his champion, was not happy either.

“And then my mum was the same thing. I just remember thinking after – I’d had an episode where I’d done too much blow … is this Sunday paper appropriate?”

I have to say something.

“I was on one and I ended up not well. And I remember coming out thinking it could, you know, eventually end your life. It could get that bad.

“And talking to my mum and her just being in tears and being like, ‘Just realise what you’re doing to yourself. You’re going to lose the one thing that you love more than anything and that’s your voice. God’s going to take that gift away from you, boy.’

“And I realised that she was right.”

Although he still drinks, he says is now aware of his excessive tendencies and can keep himself in check, Sewell has taken his therapist’s very LA advice and now does what makes him happy: singing, playing five-a-side soccer and hiking.

“Playing shows is fun to me,” he says. “I don’t play as much as I want to play. That’s what’s the best thing in the world to me is. It was never that I needed to drink because I didn’t get fun from anywhere else.

Sewell’s renewed focus on his career is starting to pay off. The long-awaited debut album, Life, is released on May 17 and the reaction to early singles – the confessional Come Clean and the catchy gospel-inspired Healing Hands – has been positive, with Sewell receiving an APRA pop song of the year nomination for Healing Hands.

His honesty in person is reflected in his songwriting, too, where he openly discusses his battles with drugs and alcohol. Was it cathartic putting it all down on paper?

“I knew I wasn’t going to get asked crazy questions about saying, ‘If I come home in the dark, after getting drunk in the park’ – Ed Sheerhan would say that, that wasn’t a thing – but when I said the word cocaine in Come Clean, that was when I was like, ‘OK, people are going to ask about this now,’” he says.

“Especially because I’m not some hip-hop dude who can say whatever I want, parents listen to my music, so it’s going to affect things.

“But I didn’t realise how much it was going to become a thing.”

Does he ever regret his honesty?

“No, I don’t regret telling the truth,” he says. “Everyone has a story and I just hope it’s not such a big part of my story that it becomes a thing, because it’s not the thing. The thing should be my voice and that’s what people should talk about.”

And his hopes for Life?

“The album is a great body of work and I think if enough people hear it it will spread because the songs are classic and real and it doesn’t really sound like anything else out there at the moment,” he says. “It’s unapologetically me and it may not be the coolest f—ing thing in the world, but it’s the truth.”

And if there is one thing Catholic schoolboy Conrad Ignatius Mario Maximilian Sewell should know, it’s that the truth will set you free.

Conrad Sewell plays the Eatons Hill Ballroom, Brisbane, on May 31; the Enmore Theatre, Newtown, on June 1; and the Forum, Melbourne, on June 7.  Life is released on May 17.