Where to go when writing an album about identity in Australia? To Mojo Juju it was obvious – the desert. She wanted to tap into the isolation she felt as a kid, being a queer Australian-Filipino in a run of country towns, so small that Dubbo was the big smoke. She needed a place where the heat was oppressive, in order to better write about oppression. She found a caravan outside Broken Hill.
“Of course, it rained the entire three weeks I was there. More rain than they’ve had in 40 years,” she says, with grim enjoyment.

There’s something poetic about that, because Juju deals in duality. She called her third solo album Native Tongue and, yet, her Filipino father never taught his children Tagalog. His relatives had experienced such difficulty migrating during the White Australia Policy era that when he did arrive, his focus was on assimilation. 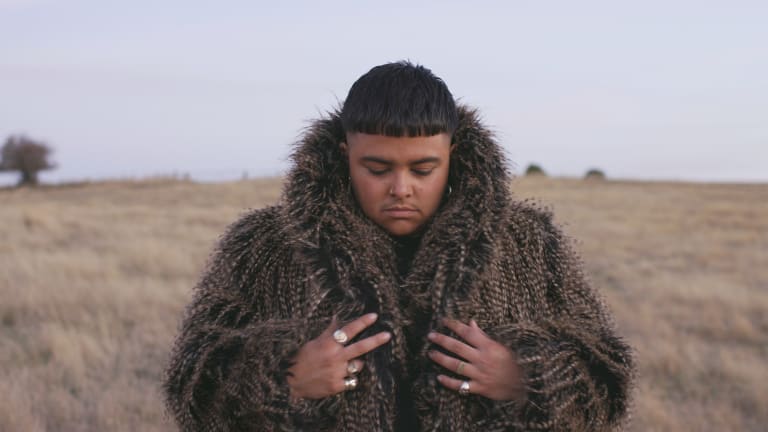 Mojo Juju’s new album Native Tongue is her most personal.

Juju’s family history is intriguing. Her mother’s Wiradjuri heritage was kept secret for years; there’s an ill-fated love story behind it all, which Juju explores from all angles on Native Tongue. To illustrate the grief of losing connection to culture, she includes two oral-history interludes from her grandmother and father. Their stories echo the displacement Juju herself had felt.

“I went through puberty when Pauline Hanson was a household name and came of age when the Howard government was in power,” she says. “I couldn’t connect to my Anglo-Saxon heritage because I was constantly told I wasn’t white. Then I went to the Philippines and realised, I have no idea what it’s like to grow up in a developing nation. No matter what part of my identity I claimed, I wasn’t enough.”

Before going solo, Juju led a wild seven-piece, the Snake Oil Merchants, that included a saw player, accordion player, double bassist and horns. As she says, “Great artists reinvent continuously,” and not only is Native Tongue far more complex in its influences – with cameos from soul singer Joshua Tavares, MC Mirrah, spoken word artist Lay the Mystic and the Pasefika Vitoria Choir – it’s her most personal album by far.

One track, Shut Your Mouth, is reminiscent of Reni Eddo-Lodge’s book, Why I’m No Longer Talking to White People About Race. “Right?” Juju agrees. “I thought, if people are going to talk about these things whenever I release an album, then we’re going to do it on my terms.”

In response to a recent review, it seems apt to ask her what Australian music even is in 2018. “What is Australia?” she throws back. “There are so many nations that make up our country and many of our First Nations people don’t recognise ‘Australia’, so do they become excluded from being classified as Australian music?”

For a forthright example of that, look no further than DRMNGNOW’s track Australia Does Not Exist. There’s also the fact that Sampa Tembo – aka Sampa the Great, born in Zambia, raised in Botswana and now living in Sydney – took out this year’s Australian Music Prize.

“Everyone used to talk about the Australian sound and that was pub rock, dominated by white male voices,” says Juju, “which sometimes seemed to almost sound too Australian for an overseas market. That’s not to say I don’t enjoy a lot of those bands – I do. But I don’t think it’s indicative of the Australian music industry anymore.”

On music criticism, she’s philosophical. “Someone reviewed a song of mine years ago and said, ‘Mojo Juju is ridiculous, egotistical and embarrassing’,” she laughs. “Initially I was hurt, but then I thought, yeah! So are Little Richard, David Bowie and Michael Jackson.”

Juju actually does a nice take on Jackson’s urgent delivery, particularly in Something Wrong, recorded with producer Jamieson Shaw (who worked on the Netflix series The Get Down). While Juju has often been described as a genre artist (perhaps it’s her former penchant for zoot suits and quiffs) the construction of tracks like Something Wrong show why she rejects categorisation.

“The bells were a throwback to Thriller, that kind of horror pop,” she says. “It’s a bit cartoony like Gorillaz; the break beats are quite Fiona Apple, or even Kylie’s Confide in Me, and I wanted the guitars to sound like INXS.”

Juju declares herself a “total music nerd”, gleaning enjoyment out of deconstructing albums. “My grandfather is a diehard jazz buff, so that was my musical foundation,” she says. “He’d put on a record and say, ‘Who’s this?’ I’d say, ‘Billie Holiday.’ He’d say, ‘Nah nah, who’s playing the clarinet?’”

Native Toungue is out now through ABC Music.