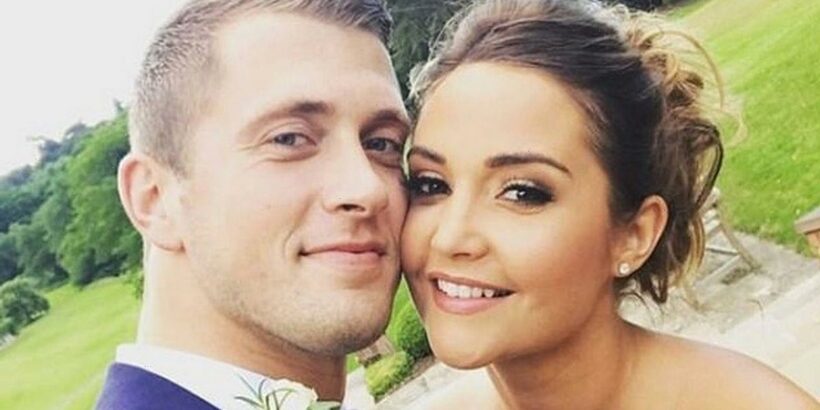 The former TOWIE hunk and the ex-EastEnders star began their relationship in 2013 after meeting at a glitzy awards ceremony.

There was reportedly drama from the beginning with Dan allegedly taking reality star Ferne McCann on a date before he made his relationship official with Jacqueline.

This led the soap star to defend him on Twitter when he received backlash online.

Jacqueline tweeted on November 3, 2012: "Guys leaves Dan alone, he's single and can do what he wants."

In August 2014, Dan, who is dad to his son Teddy from a previous relationship, and Jacqueline announced they were expecting their first child together.

They became proud parents to Ella in February 2015 and they took the next major step in their relationship four months later.

The lovebirds got engaged in June 2014 when Dan proposed in Greece where they were on holiday with their daughter.

Jacqueline and Dan were engaged for two years before they decided to tie the knot in June 2017.

Their wedding took place in Cheshire Manor House which was formerly owned by Gary Barlow.

In January 2018, the newlyweds announced they were expecting their second child and Jacqueline gave birth to Mia in June of the same year.

According to The Sun Jacqueline and Dan went "on a break" after a series of explosive rows that were caused by Dan going away on a boot camp in Marbella when Jacqueline was over 30-weeks pregnant.

The rumoured "break" led to a string of other obstacles for the couple. Dan previously told Daily Star his dissatisfaction with the relationship was why he left.

He said at the time: "I left because we were arguing and it is such a waste of energy.

"The way I look at life is every day spent unhappy is a wasted day, and we were both having a lot of unhappy days.

"I still obviously care for Jacqueline but if we can’t make each other happy then we shouldn’t stay together. Life is too short."

Pictures of Dan and Love Island beauty Gabby Allen emerged during their reported "break" which sparked rumours that the two reality TV stars had a fling, which they both deny.

The married couple managed to work things out but things took a turn in 2019 when Dan became the centre of more cheating allegations.

He was rumoured to have been grinding and thrusting all over Love Island's Alexandra Cane while on night out, which they both deny.

Even more allegations came to light when Jacqueline entered the I'm A Celebrity jungle later in the year.

Dan publicly apologised to Jacqueline for mistakes that "almost cost his marriage" in a lengthy social media post after they reunited following her winning stint in the I'm A Celebrity jungle.

Jacqueline and Dan have recently bought a £1.2million home in Essex complete with six bedrooms, five en-suites and a cinema room.

The couple announced in March they had finally collected the keys to their "forever home", with Jacqueline telling her fans she "loves" the space and is "so proud" of the family's new beginning.

They have even set up their own house account on Instagram called Home With The Osbornes, requesting "inspo" from those following the page, as they "need all the help we can get".

In a recent interview with The Sun, Dan said his marriage with Jacqueline is stronger than ever.

Speaking to The Sun on Sunday, Dan said: "We’re at a completely different stage to that. Any mistakes are in the past now.

“Our chemistry is still strong. I’m not soppy but I think she is just as amazing as I did when I first met her."