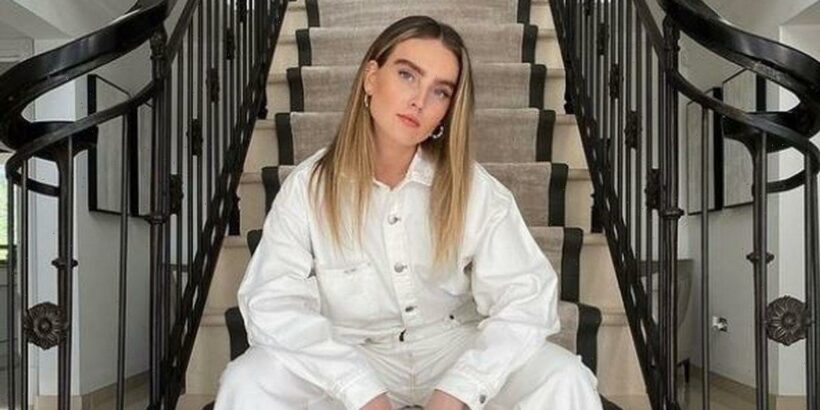 Little Mix's Perrie Edwards and her beau footballer Alex Oxlade-Chamberlain have been living quite the lifestyle since they first started dating in 2016, eventually moving in together in early 2019.

With holidays, a home and now a baby on the way, the duo have easily become a popular couple – and it shouldn't be too long before another person is added to the mix.

As they prepare for their new arrival, it's likely that they're finding the perfect room in their house for their little one, but what does the rest of their home look like?

Few people will forget the look of Perrie's entrance hall after this iconic photo did the rounds – with the world's best photobomb.

Back in April, the beauty posted a photo of her sitting on the stairs of her entrance hall, but in the series of snaps, her cleaner was seen at the top of the steps, leaving fans in hysterics.

Aside from the chuckles, people quickly fawned over her beautiful home, which saw stone stairs with a black banister and a grey and black stair runner following up all the way to the top.

Stone floors continue throughout the house into the kitchen, while white walls are seen throughout.

Perrie has decorated her home with prints in black frames on the walls of the entrance hall – and at the top of the stairs you can see it split into two directions.

In a slightly more telling snippet, Perrie shared a clip of her dancing alongside Alex as they boogied up their stone stairs from the kitchen.

On the right of the steps is a small tree, bringing some colour to their beautifully nude home, while on the left you'll spot a stainless steel fridge.

With further look inside into their hallway, you can see that Perrie and Alex have LED lights installed in their wall, with more prints placed around the house.

On the top floor, Perrie and Alex kitted it out with a grey carpet, a different vibe to their stone interior downstairs.

The black banister clearly goes a little further around their house, as a slightly different style of the chic interior is portrayed in the background of a photo of Perrie in a stunning matching gown.

In the same shot, there is a brief snippet into the beauty's bathroom, which sees a light grey stone tile placed on the walls.

More carpet is spotted throughout their living room, with a TV and lavish sound system installed into the walls. Their home is certainly looking cosy, particularly if their Christmas snaps are anything to go by.

With their grey curtains falling by the window against a wall featuring a subtle pattern of grey wallpaper, Perrie and Alex posed in front of their Christmas Tree.

The couple's home is certainly mesmerising – but fans are eagerly waiting to see a sneak peek of the room that the mini-Mixer will be sleeping in.

In an interview with TikTok, Perrie explained how Leigh-Anne found out her fellow bandmate was expecting.

She recalled how she told her manager Samantha Cox, who asked if she could add someone to the call, recalling the exchange, Perrie said: "I was like 'No, I'm really nervous, it's very early, I don't want to tell anyone' and then she said 'Do you trust me?'… I was like 'Of course, with my life – go on then, add someone'

"So she added someone to the call and then I just hear this voice come out and she goes, 'Perrie! You too!' And then we just cried our eyes out. We couldn’t believe it!"

Little Mix will be going on tour next year as they head on their first music gigs following the postponement of their previous shows.