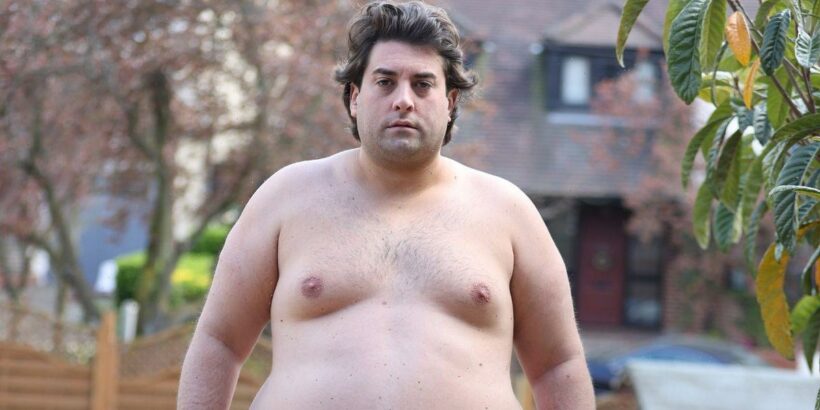 James Argent looked dramatically different as he showed off his newly-trimmed physique – after shedding a whopping 13 stone in weight.

The former TOWIE star, 34, was almost unrecognisable as he stepped outside for a swim at a pool in Essex.

Smiling Arg went shirtless for the occasion – and it highlighted just how much weight he'd lost after going in for life-saving surgery.

The Celebs Go Dating alum looked incredible by the water – and he seemed proud to be sporting his slimmed-down figure in front of the cameras.

Despite the chilly temperatures, confident Arg headed for a dip in the pool as part of his impressive fitness regime.

The TV star was snapped wearing a pair of guitar-print swimming shorts and a pair of flip-flops.

Not letting the cold air get to him, he swam a number of lengths in the pool before climbing out to have a shower and put on a pair of stylish sliders.

Nine months ago, the reality star underwent gastric sleeve surgery at Transform Hospital Group – and he went on to shed nearly half of his 27.5st body weight.

The gruelling procedure saw 70 per cent of his stomach removed – and he has to drink water half an hour before or after eating.

His new diet consists of chicken salad, fish and vegetables – along with supplementary vitamins, green tea and water.

Arg has also been hitting the gym – and has been getting stuck into boxing, swimming and weight training sessions.

Arg previously told The Sun that he didn't listen to doctors despite being on the brink of death.

Speaking about his surgery, Arg explained that he reached his largest size during the pandemic – and that he was close to death.

He said: "I reached the heaviest I've ever been in the height of the pandemic."

"Doctors said I was ­dicing with death because I've got bad asthma and was morbidly obese, which was the worst possible combination if I was to catch Covid."

"I could have been a goner, so I just knew I had to do something."