James Arthur is being sued by The Script for copyright infringement over claims that his hit ‘Say You Won’t Let Go’ is too similar to ‘The Man Who Can’t Be Moved’.

According to Billboard, the attorney who represented Marvin Gaye’s estate in the suit against Robin Thicke’s ‘Blurred Lines’ has filed a suit against the British singer.

Richard Busch filed the suit in Los Angeles County Superior Court on Monday (May 21), and argued that Arthur’s 2016 comeback hit earned him $20 million, and that it ripped off The Script’s 2008 hit. 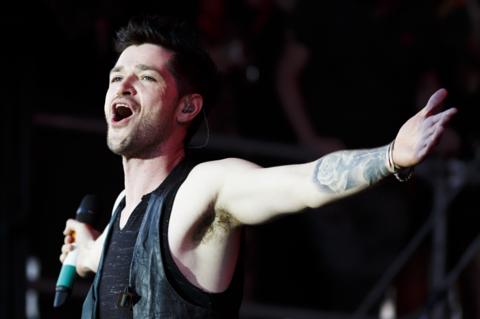 ‘The Man Who Can’t Be Moved’ was penned by Daniel O’Donoghue, Mark Sheehan, Andrew Frampton and Stephen Kipner, while on Arthur’s side, it also names co-writers Neil Ormandy and Steve Solomon as co-defendants.

Arthur had no comment when contacted by Digital Spy, and sources say that he is denying the claim.

“It’s widely known Mr. Arthur was dropped by his record label for public controversies, which caused a break in his career. It wasn’t until the release of ‘Say You Won’t Let Go’ that he achieved worldwide success,” Busch said in a statement to Billboard.

The suit also alleges that Arthur approached The Script about collaborating in 2014, though was turned down. It claims that he copied the “essence” of ‘The Man Who Can’t Be Moved’.

Busch is seeking a jury trial, and as well as asking for all streaming, distribution, publishing and touring revenue, he is seeking statutory damages.