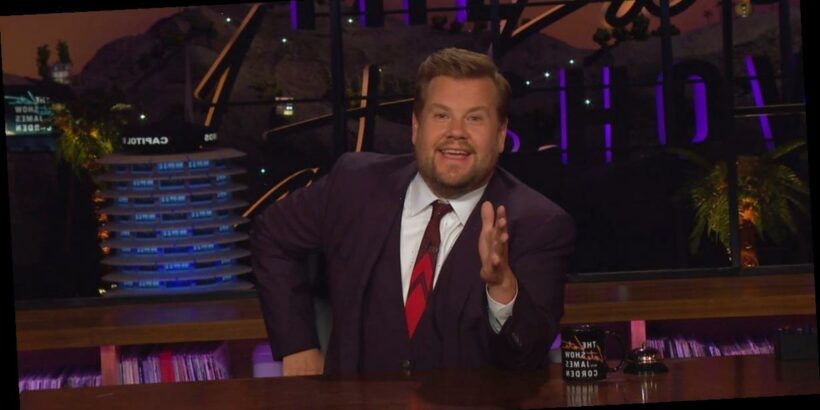 Ryan-Mark Parsons is back with his exclusive Daily Star column, this time doing things a little different.

The Apprentice star is tackling James Corden and his new project with Prince Harry – and it's safe to say he isn't a fan of the Gavin and Stacey star since he had his Hollywood break.

Thursday night saw Piers Morgan sit down with Gemma Collins for Life Stories, and viewers learnt an awful about the TOWIE diva's turbulent past and rise to superstardom.

Ryan-Mark appears to appreciate the thawing of her GC persona, too.

Our columnist is also introducing a quick fire round to keep you going over the weekend too, with everything from North West's masterpiece to Holly Willoughby's birthday dress on the agenda.

Please! Someone tell me why I can’t escape this man?

Everywhere I look on-screen he’s there, like an annoying rash that can’t be treated.

One of the greatest mysteries in showbiz is how James Corden went from humble Smithy in Gavin and Stacey to A-list Hollywood host on CBS’s Late Late Show.

He hasn’t stopped there, he’s also appeared in a plethora of major films including Into the Woods, Cats, Lesbian Vampire Killers, and recently The Prom.

Let’s be totally honest with each other… in my opinion Mr Corden is utterly talentless. You can’t deny it.

He stands out for being large, loud, and friends with everyone with at least 1million Instagram followers.

I have to say, his ability to network is second-to-none, but that’s where it ends.

Otherwise, the man is as drab as Ellen DeGeneres but without the lesbian jokes.

We’ve all had enough, but there’s nothing we can do about it.

Recently, James has been caught schmoozing another one of his celebrity pals, "Hollywood Harry" formerly known as HRH Prince Harry, the rebellious royal who decided to abandon duties at home in the pursuit of fame and – ironically – privacy.

Harry and Meghan have propelled their global brand by signing multi-million-dollar deals with the likes of Netflix and Spotify, all the while taking issue with tabloids and pap agencies left, right and centre; doesn’t make sense, come on.

Thank goodness we still have William and Kate, working non-stop throughout the pandemic and selflessly giving their lives to service for this country.

In the meantime, Harry was spotted on top of a bus lobbying James during filming for Carpool Karaoke.

No doubt he’ll be pedalling the Meghan-fuelled humanitarian agenda of woke-ness, boring chatter about their baby, and their jumped-up awards scheme that really means nothing.

James and Harry have been friends for years, in fact James attended the royal wedding to Meghan Markle in 2018, and I’m not surprised, there are so many similarities.

For one, both ended up in roles they don’t deserve and two, they ditched the UK for better lives in the USA.

Good for them — I wish you all the best, but I’d much rather not hear or see any of them again.

I never knew Piers Morgan would be able to get so much out of a character who’s known to be unashamedly guarded and understandably defensive.

The self-styled GC is a brash and diva persona Gemma created as an alter-ego to her more humble personality.

During her interview with Piers, we got to see behind the Oompa Loompa fake tan, Gucci sunglasses, and voluminous blonde extensions.

Trust me, there’s a lot.

I thought she was an obnoxious, egocentric, attention-seeking personality who only cares about money and fame.

Sometimes I thought her desperation was disguised as ambition to become the UK’s answer to Kim Kardashian, but Gemma is complex, flawed, and ultimately a human that deserves more respect.

She’s unquestionably damaged and has taken more hits than most.

During the eye-opening episode, Gemma revealed personal struggles with trolling, her turbulent relationships including the toxic bond with James Argent, her decade-long battle with weight, and pregnancy issues that’ve emotionally ripped her life apart.

Gemma also spoke to Piers about owning a sex tape she might release for at least £1million if she ever found herself “skint”.

During the conversation, which seemed like therapy, Piers was able to persuade Gemma to delete the sex tape and urged her to stop commodifying every aspect of her life.

Fair enough, it was good advice, but there seemed to be some bizarrely odd flirting taking place, where Gemma had to step-in after Piers pressed for details about the tape, making this specific encounter more uncomfortable after Gemma called Piers “a sort” and “an attractive older guy”.

I could see them together: definition of a power couple. Kim & Kanye, who?

Dressed like a glamorous clown, Gemma shined in chromatic Versace but her past was ironically far less colourful.

She candidly spoke about self-harm in her early 20s and feeling suicidal after James Argent battled a cocaine addiction which wrecked their romance.

I felt Gemma needed this experience, she made it clear she felt privileged to be joining Piers on his iconic Life Stories programme, whilst critics accused ITV of “scraping the barrel” in booking Gemma.

However, there’s no denying she's one of the UK’s most recognisable faces with a bank balance to match her notoriety, and there’s no doubt we’ll be seeing more of her for years to come.

Tracy Beaker is back

The queen of children’s TV is making a triumphant return in the form of CBBC’s My Mum Tracy Beaker.

I was wondering who was playing Tracy and I was totally shocked to learn Dani Harmer – the original Tracy Beaker – would be portraying the role.

With a such a broad acting portfolio this news has sent shockwaves across the UK.

Can’t wait to see Dani in her new role. Woo-hoo!

The nation’s favourite fuzzy presenter has turned 40 this week.

Yes, I’m just as shocked as the rest of you. Please tell me what you’re putting on your face Holly…

We’re all craving the same serum that has kept you looking like 30 for the past decade.

To commemorate the milestone, the blonde bombshell wore the same dress her mother adorned on her 40th birthday in 1988 — she rocked it.

Just tell Phil to never read a poem to you on air again — total cringe-fest (well, it is This Morning).

Bosses are desperately fighting to keep Love Island on our screens this year, as questions are being raised over whether it will be safe to film amid the pandemic.

I’ve had enough of this trashy reality junk which has produced nothing but law-bending influencers that are living the life of Riley in Dubai.

How could we forget its victims too? The tragedies that have come out of this show should be enough for this abattoir to be shut down.

Once again Kim Kardashian and her family have caused an internet storm, and it’s coming from the North.

The reality TV supremo has bashed journalists and trolls accusing her of lying about the Louvre-worthy oil painting of mountains, trees, and an expansive lake painted by her daughter North West.

Paging Christie’s — get this “masterpiece” in auction.

Do you believe her? Apparently it took several weeks and I’m also Kim and Kanye’s long-lost son… life is full of surprises! Apparently Lauren Goodger has been feuding with Piers Morgan, which is the first I’ve heard of it.

She has accused the acerbic broadcaster of abusing her “live on TV” and “trolling” her during one of his diatribes about the vaccine.

Get over it, darling.

These people adore the attention and will do anything to get a headline.

I agree with Piers, they’re total half-wits but what do you expect from TOWIE, at least Gemma Collins has substance.