Grammy-nominated musicians Jazmine Sullivan and Eric Church joined forces to deliver a powerful rendition of “The Star-Spangled Banner” at the Super Bowl. The performance marked their first-ever collaboration.

Church sang first, opening the national anthem with just his guitar strumming and signature raspy vocals before Sullivan joined in the second verse. While the pair harmonized beautifully for their performance, it was Sullivan’s standout vocals that stole the show. The singer looked just as stunning as she sounded, wearing a bright white, oversized pantsuit with crystal detailing and a matching sparkling headpiece that adorned her slick ponytail. 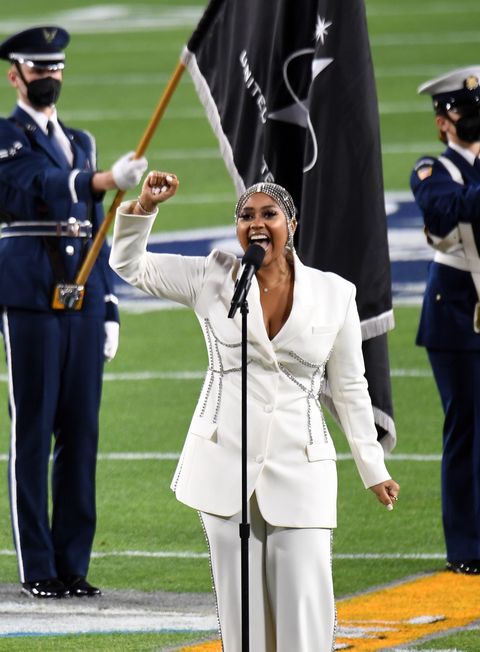 Sullivan and Church have markedly different yet highly acclaimed musical careers. While Sullivan is an R&B artist who has worked with the likes of Frank Ocean, Mary J. Blige, and Kendrick Lamar, Church is a country singer and a four-time Country Music Award winner who’s worked with Keith Urban, Luke Combs, and more.

Before being asked to sing the national anthem together, Church even said that he had never listened to Sullivan’s music before. “She may be the best singer. I was floored,” he said, per Variety. “And you know what, the best thing about this, no matter what happens, because that’s a nervy thing that we got to do, but what a fan, I’m a fan. I’ve went in and listened to everything she did. And I had heard her name, but full disclosure, I had not listened.”

This year, Sullivan dropped Heaux Tales, her first album since 2015.

“Feeling undervalued, unappreciated and overlooked, even as we work harder, is always in the back of women’s minds. This project is about taking up this space and doing so in a way that you choose to, not because you’re told how to by men or society,” Sullivan told Billboard of the project. “How I present myself is how I choose to, and you’re going to accept it. Women are really standing in their confidence and power now, and I wanted to add to that in this way. I see it so much in the new artists and other women who are shining now. It makes me proud.”