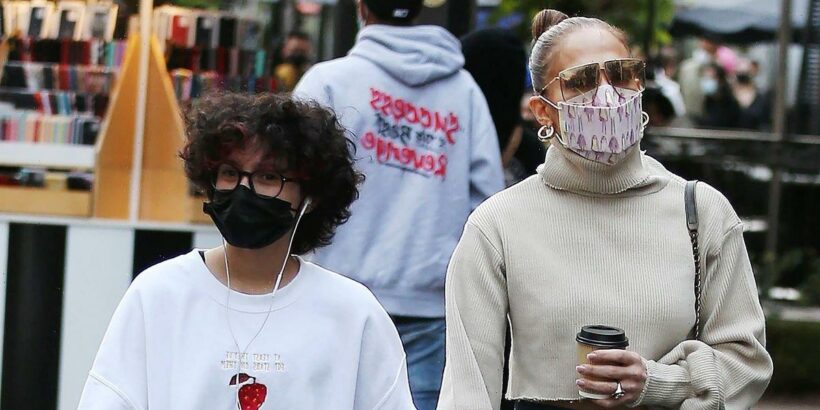 Jennifer Lopez has been praised by fans after referring to her 14-year-old child Emme with gender-neutral pronouns.

The 52-year-old pop star introduced her teen onto the stage for a duet at the LA Dodgers Foundation Blue Diamon Gala on Thursday (June 16).

J-Lo called Emme "my favourite duet partner" and used the gender-neutral term 'they' when discussing her at the show.

She said: "The last time we performed together was in a big stadium like this and I ask them to sing with me all the time, and they won’t. So this is a very special occasion.

"They are very, very busy, booked and pricey. They cost me when they come out. But they’re worth every single penny because they’re my favourite duet partner of all time. So if you will indulge me."

Jennifer and the teen dazzled the stadium crowd with a rendition of Christina Perri's 2011 hit, A Thousand Years.

Emme could be seen sporting a hot pink outfit which included a pink shirt, shorts and matching socks, whilst Jennifer looked glam in a green feathered coat.

The sweet family singing duo sang into a rainbow-coloured microphone during their performance.

At the end of their song, Lopez urged the audience to cheer for her child as she said: "Give it up for my baby."

Jennifer shared Emme with her ex-husband Marc Anthony, whom she was married to for ten years before they split in 2014.

Many fans were delighted with J-Lo's parenting choices and flocked to support the star on social media.

A second said: "The best parents love and support their kids – go JLO and Emme!" Lopez and her ex Anthony welcomed Emme into the world back in 2008 – alongside Emme's twin, Maximilian.

Anthony filed for divorce in April 2012 after the couple announced their separation the previous July, but their divorce wasn't finalised until 2014.

J-Lo, who retained primary physical custody of both children, announced she was engaged to actor Ben Affleck for the second time in April.