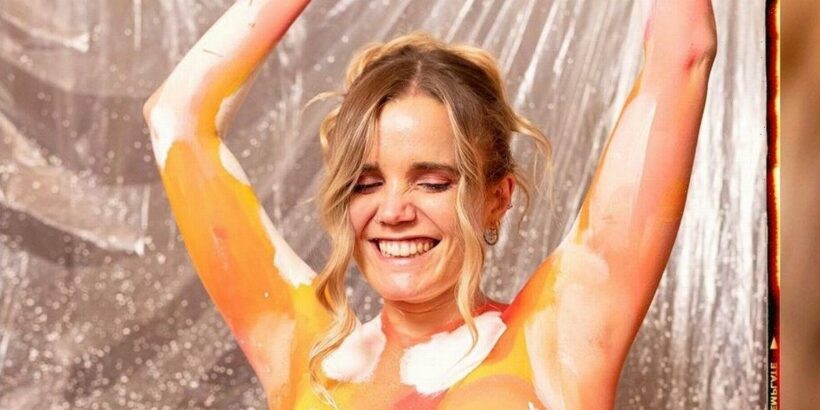 Jeremy Clarkson's 27-year-old daughter Emily Clarkson has taken part in a campaign which saw her strip off to nothing but nude underwear and boob tape in a naked catwalk.

Emily was drenched in paint with a variation of pink, white and orange swipes all over her body as she allowed her figure to go on full display.

The campaign was lead by artist Sophie Tea in a bid to promote healthy body image which saw numerous women get involved with the show.

Speaking to MailOnline, Emily said: "I hope everyone who watched the show was able to see themselves represented."

Emily shared a snap of herself on Instagram in the nude as she prepared for her time on the catwalk and said she "felt free" after getting out of her comfort zone.

Emily wrote: "And beautifully, mercifully, from the moment the brush hit my skin; it ceased to be about me at all. There was no room for my insecurities, because every inch of that room was full to the brim of female empowerment, the scale of which I've never seen before."

She explained that she had never been so proud in her life, adding that she has never felt that level of strength.

Emily added: "If I had grown up seeing the female form only through Sophie Tea's lens, my life would've been very different.

As Sophie Tea Art was praised by both Emily and other members of the show, she shared a photo on Instagram of the various women who took part flaunting their bodies as part of the catwalk.

The show, which took place over the weekend, was titled 'Women' and was set to inspire others to be completely confident as they watched various ladies storm through with their naked bodies.

As Sophie shared the snap on Instagram – with intimate areas blurred – she hit 19,000 likes as her followers praised her for putting together the show.

Sophie is known for painting nude photos of women of all shapes and sizes, and chose to put on the catwalk to celebrate those women.

As she shared a snap to Instagram, she wrote: "And that's a wrap! Nudies I love you forever. Thank you so so much to everyone involved in our final ever nudie catwalk. End of an era, but it's been a good one!"

Emily responded to the caption to tell Sophie that it was an "honour" to take part in the final show.