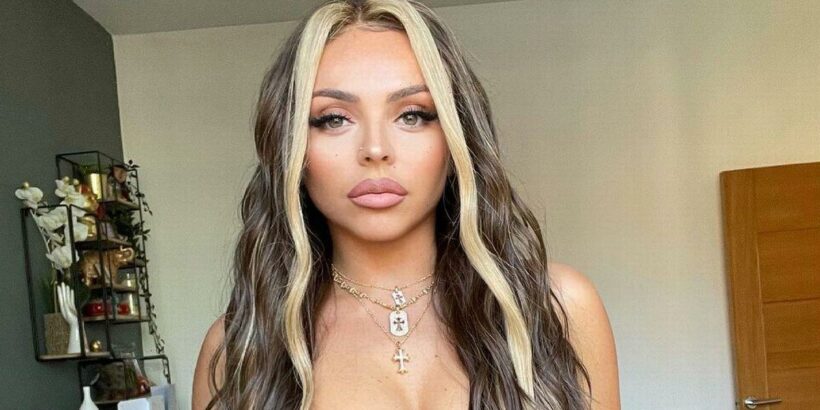 Jesy Nelson was taking full advantage of the scorching UK weather as she stripped to a teeny crop top.

The former Little Mix bombshell took to Instagram dazzling her legion of admirers with another scorching reveal.

Looking stunning, she showcased her killer curves in a teeny brown ribbed top that flashed her cleavage and toned torso.

The 29-year-old rocked a flamboyant pair of graffitied jeans that were pulled up high onto her waist.

She rocked wash denims and a cream clutch bag that were created by the American apparel brand Von Dutch.

Adding touches of glam, the songstress popped on a trio of gold pendant necklaces to complete her cool look.

Jesy had reverted back to her old brunette and blonde bombshell locks, ditching the full-on platinum tresses she'd been flaunting recently on social media.

The Shout Out To My Ex hitmaker kept her makeup earthy, opting for a brown eye-shadow pallet, golden brown cheekbones, a peachy lip with dark liner and her signature fluttery false lashes.

It's safe to say Jesy looked fierce as she smouldered up a storm in front of the lens.

Fans couldn't get enough of the starlet, who is about to unveil a new solo track soon, and took to the comments section to swoon praise.

"Those jeans and the two highlights. God is a woman and her name is Jesy Nelson," said one online user.

"Baby look at you," exclaimed another.

"She's a legend and icon in the making and she's living in the moment," chimed a third.

While a forth added: "I'm obsessed with your hair."

Jesy announced last week that she had signed a deal with Polydoor Records after teasing her music in the studio for some time now.

She told her 7.9million followers: "So excited to announce that I've signed my first ever solo record deal with @polydorrecords @universalmusicgroup

"This is such a pinch me moment. I cannot wait for you guys to hear what I’ve been working on."

Earlier this year Daily Star exclusively told how she had parted ways with Sony Music, the label who helped guide her career with Little Mix for a decade.