It’s been a little over a month since John Lydon (aka the Sex Pistols’ Johnny Rotten) lit into Marky Ramone, Henry Rollins and a murderers’ row of underground-music legends at an L.A. panel about punk music. “Hello, Johnny Rotten never did the walk?” he bellowed when Ramone suggested he didn’t “walk the walk” like the MC5. The Pistol then got up and strutted around in front of the audience. Although it seemed contentious and over the top at the time, Lydon says everyone failed to see the humor in it.

“Can’t a bloke have a laugh?” he says on a call from his Los Angeles home. “I was thrown into this ball of [people] trying to take things too serious[ly] and missing the ethos of it all. What on Earth am I on a panel with these people for? It doesn’t make sense. I never understood this ‘punk movement,’ per se, because we have very different backgrounds, and we’re talking about very different subjects.”

Despite his disdain for people attempting to canonize punk, Lydon, 63, has supported New York City’s Museum of Art and Design’s new exhibition, Too Fast to Live, Too Young to Die: Punk Graphics, 1976 – 1986 — at least nominally. “This promises to be even more hilarious fun,” he says. “I really have no idea what they view as ‘punk art,’ and so why not? Let’s have a go at it.”

The exhibition, which opened this week, showcases more than 400 examples of punk-related graphics, including flyers, posters, album covers and other memorabilia. It aims to draw connections between the genre’s imagery and sci-fi, horror, comic-book symbolism, as well as things like parody and creative techniques like collage and appropriation (similar to the Sex Pistols’ Never Mind the Bollocks cover).

Lydon has shied away from such past events, but he’s made an exception because he wants to reinforce the “true history” of punk from his perspective. “If I don’t, somebody else will rewrite my history for me,” he says, sounding weary. “And as we know in the past, that’s happened many a time and they’ve always got it wrong.” He’ll be setting the record straight in his inimitable style in a talk with Please Kill Me coauthor Gillian McCain at the museum on Monday.

Today, he ruffles at the idea of a collective approach toward punk within art, because, to him, punk is a construct. “I didn’t join a punk movement,” he says. “I joined a band and we became the Sex Pistols, and then along came a punk movement.”

And with that proclamation, he fluidly moves the conversation to become a shooting range for the perceived punk community at large. “[My history] certainly didn’t have very much to do with New York poetry readings,” he says, ribbing possibly Patti Smith. “To me, if there wasn’t the Pistols and that fabbo guy Johnny, I don’t know if you would have ever really been hearing of Iggy or the Ramones or the New York Dolls or any of them. They all ferreted a way into what they wanted to be a movement, which I never accepted as a movement. I just see it as lots of different individual ideas that should have been approached as individual ideas, not just one big Glad bag of soggy fucking nonsense.

“The New York Dolls were hilariously entertaining,” he continues. “But the ideology behind, ‘Oh, look how incompetent we are and look at all the drugs we take,’ that was really dull. And if Iggy’s the ‘godfather’ of anything, it must be self-flagellation. There’s no way I’m going on copying that.” He pauses. “Unfortunately, we did have a Sid in tow,” he says, referring to the Pistols’ often bloody bassist Sid Vicious who died of a drug overdose, with a laugh. “It’s the differences that make us better.”

He also fails to see a correlation between his fashion choices and what other musicians have worn. There is no punk “look” (something the exhibit touches on) in his opinion. When I remind him that Marky Ramone said Lydon ripped off New York punk trailblazer Richard Hell’s look in the mid-Seventies, he gives a Bronx cheer and laughs. “It shows his ignorance,” he says, still laughing as he speaks. “There he is, still in his Ramones wig and the jacket looking like, for all the world, a Muppet. Really, just be sensible, you silly boy. I’m John. I’ve never worn the same thing two days running for the entirety of my life, since I was very young — a long time before punk and a long time after.”

“We didn’t have time to sit around and be that indulgent,” he says of bands like the Ramones and New York Dolls who cultivated an uniform look. “We had to raise £20 to rehearse, so we weren’t gonna waste a second on ‘art theory.’”

That said, he takes great pride in the visual art that accompanied the Sex Pistols’ albums and his post-Pistols work with Public Image Ltd. The Never Mind the Bollocks cover, which Jamie Reid designed, was inspired by a crime show on TV at the time. “You’d see this show on TV, and go, ‘Hahaha, there we go. Let’s reference blackmail,’” he says, laughing. “We felt we were being blackmailed by a really shitty industry an the class system that was out to destroy and kill you no matter what, hence the title. … ‘Bollocks’ meaning shit, rubbish, crap, lies, fake news.” They took it to another level with their “God Save the Queen” single cover, covering up the Queen’s face with their ransom-note lettering, and putting a safety pin through her nose. “That was a vast improvement, image-wise,” he says. “Something to catch the snot on, a coat hanger for a royal booger.” 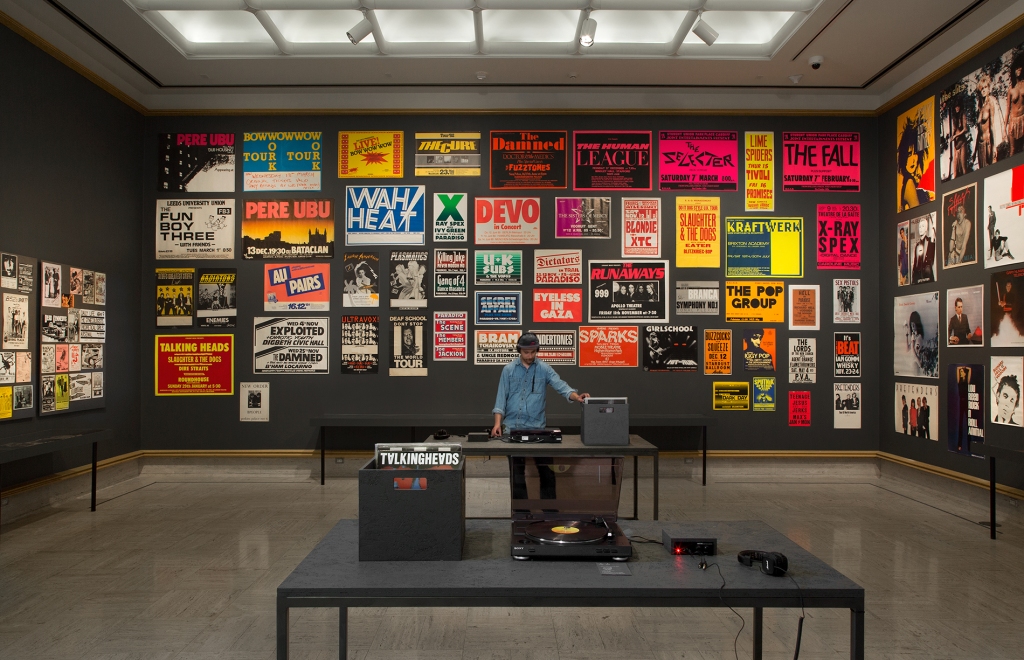 “Everybody deserves to be there,” he says of artists like Patti Smith, the Slits, Siouxsie Sioux and Lou Reed featured in the exhibit. “They’re all good people in their own different ways, but when they try to rewrite a bigger part for themselves, then it’s like, stop that. Of course there were many bands that came after that just wanted to sound like all of us put together, but we’ll leave Green Day out of it.” He giggles. “I’ve been mocking them for years, and they’re getting so annoyed with it, and it tells me, ‘These really are the brattish children I thought they were.’”

Although he famously thumbed his nose at the Rock and Roll Hall of Fame, he approves of people preserving memorabilia for their own personal use. When I tell him that Joy Division and New Order’s former bassist, Peter Hook, was auctioning his ticket stub to the Sex Pistols gig that inspired him to play, Lydon is shocked. “What’s his name, Wedgie? Heggie?” he says. “Oh, Hooky! I like Hooky, but my God, have you no shame? I’d rather scrounge around dustbins for ha’pennies than do that, because it means something to me, and it doesn’t mean nothing to anyone who has the money to just buy it off you. He wants to obliterate that. Oh, Hooky, oafish sad sack.” And when he heard that the son of Westwood and the Pistols’ manager, Malcolm McLaren, wanted to burn some punk memorabilia, he was furious. “I thought, ‘You spiteful cunt,’” he says. “At least sell it and raise the money for charity.”

So he’s at least happy with the Museum of Art and Design treating some of this stuff with respect. “If punk’s a donkey, I’d rather be the head than the ass,” he says.

But he does add that the concept of putting posters on a museum wall reminds him of another exhibit he attended. Some people in Iceland had told him that they’d created a museum for punk, so he flew over to check it out. “Lo and behold it was their only underground public toilet, absolutely swathed in punk memorabilia,” he says, giggling. “I didn’t think I was going into a toilet full of punk art. But it kind of worked, because it was so insanely funny. To just sit there and not mindlessly stare at a gray tiling scheme was very excellent. I had a really good poo in that place.”