If you've seen lots of little girls wearing really big bows in their hair recently, that's the Jojo Siwa effect. You may have never heard of the 15-year-old YouTube sensation but you soon will.

She is in Australia for a tour of shopping malls and theme parks, arriving at the Gold Coast on Friday. Expect some Beatlemania-style hysteria, but this time from tween girls. 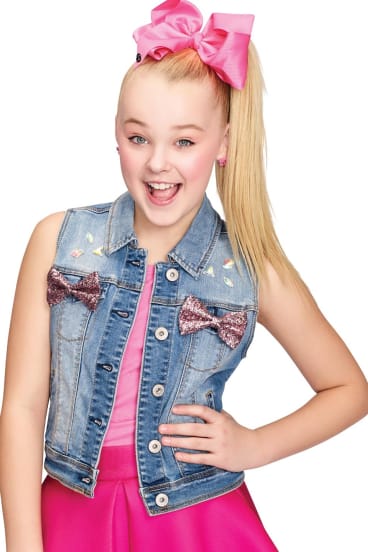 YouTube sensation JoJo Siwa’s first appearance in Australia will be at the Logie awards on Sunday.

Her first public appearance in Australia will be on the red carpet at the Logie awards on Sunday. She'll be performing in a free concert at Westfield Parramatta next Saturday, July 7.

To say she is popular in her market is an understatement. Dancing since she was two, she is a Dance Moms alumnus who has taken on a social media life of her own.

The American teenager has 6.7 million subscribers to her YouTube channel, which has had an incredible 1.4 billion views. Jojo has 7 million followers on Instagram.

“She is such a fun, energetic role model for kids and lives and breathes the Nickelodeon spirit,
through her upbeat songs to her stance against bullying,” he said.

Jojo's all-important "merch'' includes said brightly coloured bows. Some schools – including in Canberra – have banned the bows for not being part of the uniform. We had a Q and A with the teenage influencer. There were lots of exclamation marks! But we didn't get an answer to the all-important question of how many bows she had sold in Australia.

Hi JoJo, what made you decide to tour Australia at this time?

I haven’t been to Australia in four years, so I’m super excited to be back!

What are you most looking forward to seeing in Australia?

When I was here a few years ago we got to feed kangaroos and hold a koala. That was a lot of fun, so I want to do that again and also check out some of the beaches.

I heard you had a movie and even a line of trampolines in the works. Can you tell me about those?

I have so many new projects coming up! I have more books, TV shows, music, everything! It’s going to be a great year!

I have a seven-year-old daughter  and we have read Jo Jo's Guide to the Sweet Life . (She even named her cat Bow Bow!) You've spoken a lot about ignoring the haters and being yourself. Where did you get that strength from to be yourself and be resilient?

I read you are going to be on the red carpet for the Logies which are like our Oscars? Do you have a special bow or outfit picked out yet and can you tell us about it?

I can’t say much about it ‘cause I want to keep it a surprise, but it’s gonna be really sparkly

Why do you think some people on YouTube succeed and others don't?

I don’t think that people don’t succeed, I think that it takes time! Everyone will have their time to shine!

Miranda Sings appears in your new video for High Top Shoes – what makes your friendship work as Miranda is probably the opposite of you?!

Miranda and I are best friends, but she doesn’t want anyone besides us to know that! But Miranda is a character who is played by Colleen Ballinger who in real life is my best friend! Colleen is so talented and the way her creativity comes to life in the Miranda character is amazing!

I saw you have been in contact with Dance Moms' Abby Lee Miller during her cancer battle. What did she say during your visit? What has she meant for your career?

Yes, I have been with Abby recently. She is not good, but she is getting better. She was happy during our recent visit and we were happy to see her doing so well! Abby has taught me so much from little things like table manners to big things like how to work with adult executives.

I know some schools in Australia have banned young girls from wearing Jo Jo bows because they are so popular but not part of the uniform. Do you have anything to say on that?

I think that kids need to listen to their teachers and principals, but at the same time, I think that the fact that my bows are so popular is unbelievable!

What would you like to do when you are an adult? Will you still be an entertainer? How do you cope being in the public eye from such a young age?

I would love to be a pop star! I think going on tour, having lots of songs and music videos would be super cool.