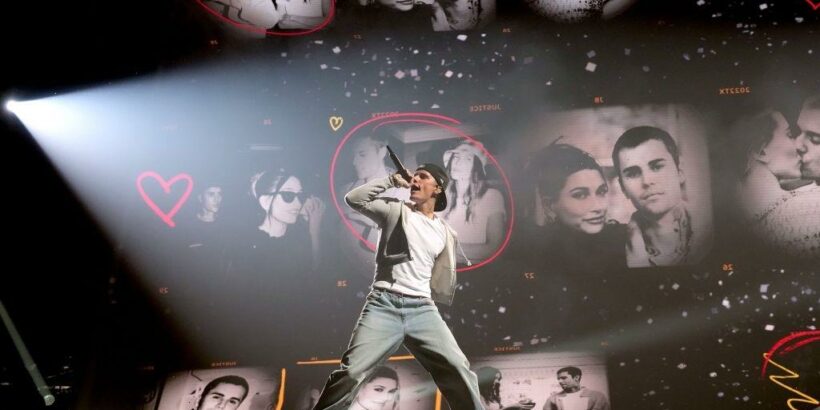 Less than 48 hours after Justin Bieber finally embarked on his pandemic-delayed Justice World Tour, the singer has postponed Sunday’s show (and perhaps more) after testing positive to Covid-19.

Bieber was scheduled to perform Feb. 20 at Las Vegas’ T-Mobile Arena, but ticket holders were informed Saturday afternoon that the show would be postponed until June 28, 2022 due to an outbreak in the Bieber touring unit.

“Due to positive Covid results within the Justice Tour family, we will unfortunately have to postpone Sunday’s show in Las Vegas,” the tour promoter said in a statement Saturday. “Justin is of course hugely disappointed, but the health and safety of his crew and fans is always his number one priority.”

While Bieber’s team did not specify who had Covid, TMZ reported Sunday that the singer’s rep confirmed that Bieber himself had tested positive and is “feeling OK” Saturday, the day after taking the stage at the Justice World Tour kickoff show Friday at San Diego’s Pechanga Arena.

A rep for Bieber did not respond to Rolling Stone’s request for comment at press time.

After Sunday’s show in Las Vegas, Bieber is next scheduled to perform Tuesday, Feb. 22 in Glendale, Arizona, Feb. 24 at the Forum in Los Angeles and Feb. 26 in Tacoma, Washington. The status of those gigs has not yet been announced.

The Justice World Tour was first announced way back in January 2020 before the Covid-19 outbreak in the U.S.; the trek was then pushed to 2021 and finally 2022, with the world tour set to keep Bieber on the road until March 2023.