Four of the six bonus tracks found on this month's re-issue of Talk Is Cheap, Keith Richards' solo album from 1988, weren't among the Human Riff's most vivid musical recollections over the past three decades.

Richards says the four tracks he recorded with Chuck Berry's pianist, Johnnie Johnson, at the time of the Talk Is Cheap sessions, turned up in the vaults when it came time to sift through what was available for the anniversary edition of the album. 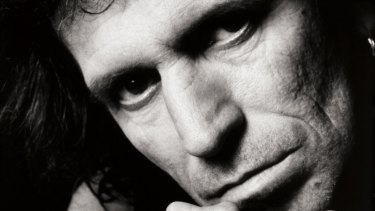 Johnson was driving a bus when saxophonist Bobby Keyes first suggested to Richards that he get in touch with the 60-year-old. Fortunately the Rolling Stones guitarist did exactly that and Johnson's contributions to a cover of Willie Dixon's My Babe, Big Town Playboy (originally by Eddie Taylor) plus the boogie-woogie of Slim and Blues Jam now sit among the expanded version of Talk Is Cheap. Brute Force and Mark On Me complete the superb six-track bonus disc (also available on vinyl), which a casts a wonderfully bluesy spotlight on the X-Pensive Winos sessions that delivered the 11 tracks on Richards' first solo album.

Coming hot on the heels of opening salvo Big Enough, the classic Richards rocker Take It So Hard on Talk Is Cheap was really the first time the then 44-year-old stepped away from the Stones to record any new music. Take It So Hard was born from a riff he'd first come up with around 1984 and then with drummer Steve Jordan on board, the pair of them chipped away at the song until it became far, far more than the sum of its many glorious parts.

As Jordan notes in the 80-page hard cover book that's part of the re-issue, Take It So Hard played a significant part in the not just his and Richards' songwriting and production partnership, but the overall mood and amazing groove on Talk Is Cheap.

"We did it in the first take," Jordan says. "It was crazy. A real wonderful experience. We were just elated. Incredible. It's the very first take and that's what you hear on the record! Amazing. Keith saw that we were getting a little bit to full of ourselves and so he made us record it again. We tried and it was never even close to that first take. It was one of those magical moments."

Jordan played bass on Take It So Hard because he was already so close to the feel of the song, Charley Drayton played drums, Waddy Wachtel is on lead guitar and Keith's looking after rhythm guitar as well as singing. "You can't just have any guitarist play with Keith Richards," Jordan said. "You need another powerhouse like Waddy."

Looking back on the recording of Take It So Hard, which was the album's first single, Richards says "we were having fun and you could hear it" and the album "holds up" all these years later. "I've been listening to it, and not through the mists of nostalgia," he notes in the book. "I really admire it."

Along with Jordan, Wachtel, Drayton and keyboard/pianist Ivan Neville (son of Aaron Neville), who were the core of the X-Pensive Winos, Keyes brings his huge, distinctive saxophone sounds to a couple of tracks, while Chuck Leavell also sits in on a couple of songs. Johnnie Johnson is there too on I Could Have Stood You Up, giving this classic `50s sounding rock and roller it's undeniable heart and soul.

When Ivan Neville, Leavell or Johnson weren't on the keys, Bernie Worrell stepped in to tickle the ivories and Richards' old Stones bandmate Mick Taylor joined in too, playing on I Could Have Stood You Up. Maceo Parker, Bootsy Collins and backing vocalists Sarah Dash and Patti Scialfa only added to the almighty list of guests stepping in and out of the sessions, which stretched over 10 months and a bunch of studios from New York to Quebec, the Carribean and Bermuda.

At the back end of the album, It Means A Lot has the laid back, jamming feel of some of those extra tracks now in the album's expanded edition, but this track too simply bristles with Keith spreading his musical wings. Jordan's drumming here is simple in terms of the beat, but snaps relentlessly, underlining the unmistakeable message in the song's title.

Other songs titles too, such as You Don't Move Me, have long been considered to be veiled references to Richards' at times fractured relationship (particularly around the time of making Talk Is Cheap) with Rolling Stones frontman Mick Jagger. However, if Keith's words inside this new edition of the album are to be believed, his respect for Mick as a frontman grew through making this album.

"I really had to work up to it," he says. "I never had to sing that much … it made me appreciate Mick's job more."

For this Keith fan (maybe even more so than Take It So Hard), one of the album's finest moments is the start of side two with How I Wish. Hearing that wonderfully raspy voice, which until 1988 had been restricted to a song here and there with the Stones, made the wait worth every moment. Jordan's drumming, again, is bang on for the song, Wachtel's slide guitar giving it the X factor and Ivan Neville's keys the icing on a very tasty cake.

Keith singing is pure joy; think of Happy with the Stones or Little T&A, and here again he's simply untouchable, flying with the lyrics and the band swirling around him, bouncing beautifully off each other and leaving him to tell the story as only Keith can.

"It didn't seem difficult to write," he says of How I Wish, adding that "it's one of those tracks where you realised, even through the first take, that this is the way it's supposed to be. It all falls into place."

Talk Is Cheap is available now through BMG.