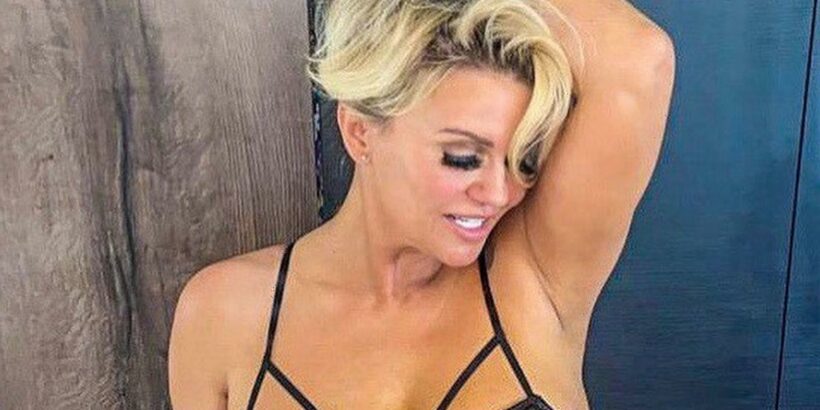 Kerry Katona offered Nigel Farage a free membership to her OnlyFans page when she appered on his GB News segment.

The former Atomic Kitten star has talked openly about her success on the adult subscription site where she sells pictures and videos and fans can request content.

After bursting out laughing, Kerry interrupted: "Do you want a subscription Nige?"

"A free subscription? Come on, I don't mind. Friends discount and all!" she insisted.

After laughing awkwardly Nigel tried to carry on: "I've got to ask you about it… I'm ignoring you by the way" as Kerry kept giggling.

"I've got to ask! That is exploitative, isn't it" he insisted.

Kerry wasn't having any of it it: "It depends on what you do on there! What's the difference between me going topless every year on holiday?"

She continued: "I don't want tan lines because I do photo shoots. Look at the photo shoots back in the day, Zoo magazine, FHM, Nuts, there's nothing that I've not done in those magazines that I'm doing on OnlyFans.

"I go topless every year on holiday with my children. Just because I'm lying down like that with my nipples under my armpits, yet when I'm doing my OnlyFans I'm stood up like that but I'm making the money from it," Kerry continued.

Nigel backed down, admitting: "Kerry, if you're doing it and you're in control of it, and you're in charge of it, then that's fine, but there has been a lot of criticism of that site, isn't there?"

Mother-of-five Kerry previously revealed she has earned more than £1million from the site, including selling feet pics.

She previously spoke out to defend Hollyoaks star Sarah Jayne Dunn after she was given the axe from the show for signing up to OnlyFans.

Kerry told The Sun: "I have never heard such bulls*** in my life."

"I know most of the women in Hollyoaks, Corrie and all those – back in the day you were more than happy to push them all out to FHM, Nuts and Zoo and all the lads' mags. Why shouldn’t they make money from their own bodies now?"