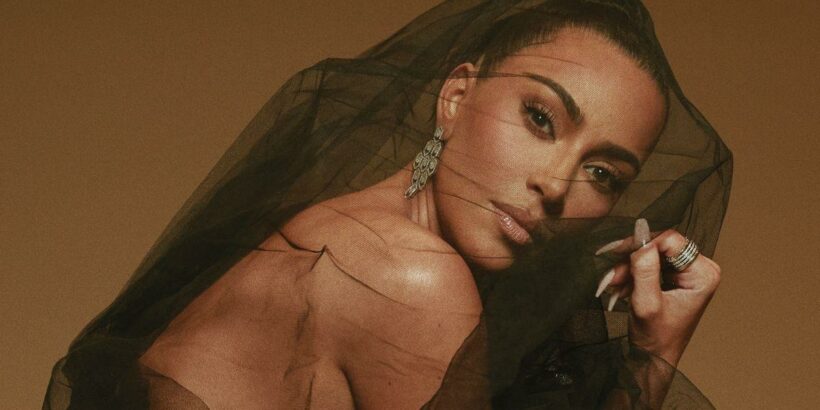 Kim Kardashian looked incredible as she posed in a sheer mesh stole for her latest magazine cover shoot.

Appearing on the front of the Hong Kong version of glossy fashion magazine Vogue the Keeping Up With The Kardashians star flashed the flesh as she smouldered in the outfit.

Kim, 41, sat sideways onto the camera baring her back and a black stocking clad thigh, her arm carefully positioned to protect her modesty as she turned her face to look down the lens.

A second image in the glamorous magazine shoot saw her seated on a leather sofa with her legs up in front of her dressed in a black trouser suit with a tiled mirrored wall around her.

Wearing a metal clasp fronted bra underneath the plunging tuxedo style blazer, Kim oozed sex appeal as she lifted her chin to gaze intently into the camera.

Accessorising with a chunky silver choker, Kim's hair flowed around her shoulders in loose wet-look waves and she covered her hands with dark brown leather gloves.

During a chat with the publication, Kim addressed her usage of social media and the impact it has had on her life – a hit topic for her in recent weeks after her very public divorce battle with estranged husband Kanye West.

When questioned about how she manages to stay 'grounded and positive in the age of social media' she admitted that her family are everything to her.

Kim – who has been embroiled in a passionate social media-based feud with Kanye and new boyfriend Pete Davidson for weeks now – says she tries to see the positives.

She said: "I’m so blessed to have such an incredible family, having their support means everything

"The advent of social media really changed the game and we really focus on engaging with social media in a meaningful way."

Kim, who shares children North, eight, Saint, six, Chicago, four, and Psalm, two, with Kanye then confessed she feels the most important thing she can teach her children is the value in family and showing respect to others.

She said: "The biggest thing my own parents taught me is that family is everything – and it’s definitely a lesson I try to teach my own kid.

"That and to be kind – I want my kids to be kind and to treat everybody with respect."

Hong Kong Vogue is out now and available to purchase via digital media.