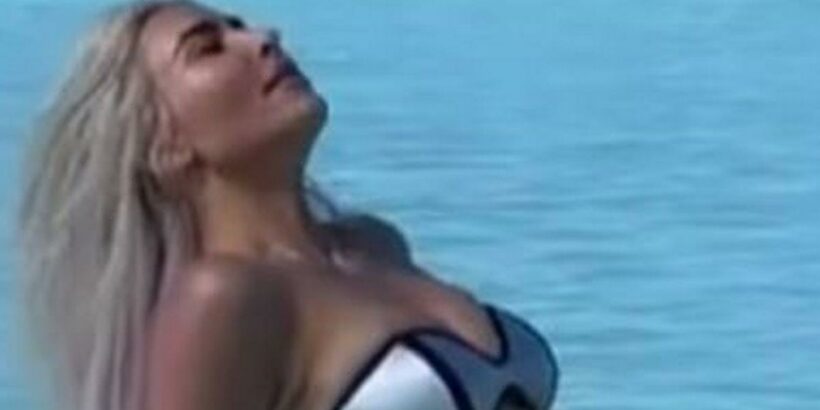 Kim Kardashian showed off her bikini body to millions of social media followers as the reality star posed for snaps on holiday with Pete Davidson, 28.

The 41-year-old Keeping Up with the Kardashians star posted an Instagram album of her recent romantic getaway to Tahiti.

The SKIMS founder flaunted her bikini body to her 319million followers as she posed on a paddleboard for a snapshot taken by a shirtless Pete.

In one gorgeous holiday snap, Kim showed off her golden tan and incredible figure as she enjoyed an afternoon playing watersports.

Her caption for her latest slew of photos read: "Stranded."

The album was full of images of Kim on the paddleboard, either trying to row herself along or sitting down.

In one snap, Pete's body art which read "MY GIRL IS A LAWYER," was on full display and referenced Kim's attempt to follow her father Robert into the legal profession.

Kim's loyal legion of followers flocked to the comment section to compliment the adorable pair.

One eagle-eyed fan penned: "The tattoo," followed by a love struck emoji, another fan wrote: "You both look so in love".

Kim also took the show to her Instagram Stories.

In the snaps, beau Pete could be heard laughing behind the camera as she twisted herself into different poses.

She included a video of herself sitting on the paddleboard as it floated across the water and wrote: "I think he's purposely letting me drift off far far away."

In another clip she's heard saying Pete's "making fun of me" and '"[he's] letting me struggle at this point".

The mum-of-four fitted in a bit of time to plug a figure-hugging outfit from her brand Good American, which was co-founded by her little sister Khloe.

The romantic duo became a public couple after she made her guest-hosting debut on Saturday Night Live, on which he was then one of the cast.

Get the latest celebrity gossip and telly news sent straight to your inbox. Sign up to our weekly Showbiz newsletter here.