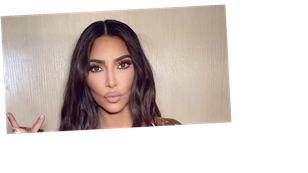 Kim Kardashian not only flaunted her incredible hourglass curves this week but also showed off her jaw-dropping $60 million (around £43million) mansion that she is allegedly keeping following her ongoing divorce from Kanye West.

The 40-year-old wowed as she took to the mirror to unleash her killer body in a number of skimpy bikinis.

Unveiling every inch of her body, the mum-of-four turned on her heel ensuring that her famous derriere also stole the show.

The reality star took to her social media platform in a bid to support her sister Khloe's luxury clothing brand Good America.

Trying to drum up sales, she modelled a number of scorching and barely-there items, sending her 211million fans into meltdown.

Wearing a maroon coloured garment with bandeau detailing, Kim said: "I got the cutest delivery from Khloe and her Good American Swim, just to see if we are feeling it.

"This is the brown. It's super cute."

Taking part in the live trying on session, she did a quick change before stepping out in an eye-popping gold two-piece that demanded attention.

The bra boasted underwire for extra support and silver-snake print trim that complemented her bronzed tan.

Kim ramped up the sex appeal, pulling up the string bottoms to sit nicely on her hips.

While she explained that she "loved" the swimwear, she did admit that her sister Khloe had worn it better.

She went on: "Ok, I don't know why I said model but I meant try on.

"Erm this doesn't look as good on me as it does Koko but I love it. I love this."

Other ensembles included purple and jet black items with the KUWTK star taking the selfie footage from her huge shower room.

The bathroom boasted a huge open plan walk-in shower, with a grey marble bath that was positioned centrally in the gigantic room.

It is alleged that Kim and her four children that she shares with Kanye; daughters North, seven, Chicago, three, and sons Saint, five, and Psalm, one , will all remain in the $60 million pad.

Meanwhile, the rap star and Kim's soon-to-be-ex has been living at their second property – a ranch in Wyoming – for the past few years.

Last month, it was announced that Kim had filed for divorce after speculation swirled that the pair were having marriage issues.

Pal's of the TV bombshell recently alleged that Kim didn't ever want to divorce and was hoping that the reality of going through with legal proceedings would be an eye-opener.

A insider source reportedly told The Sun: "Kim loves Kanye and her plan to turn things around by filing for divorce has backfired.

"She had visions of the news breaking and Kanye would in turn have a reality check, yet instead he basically rolled his eyes.

"Filing for divorce was incredibly difficult for Kim. She felt this huge gesture and move on her part would make Kanye turn his life around, but unfortunately, it hasn't."