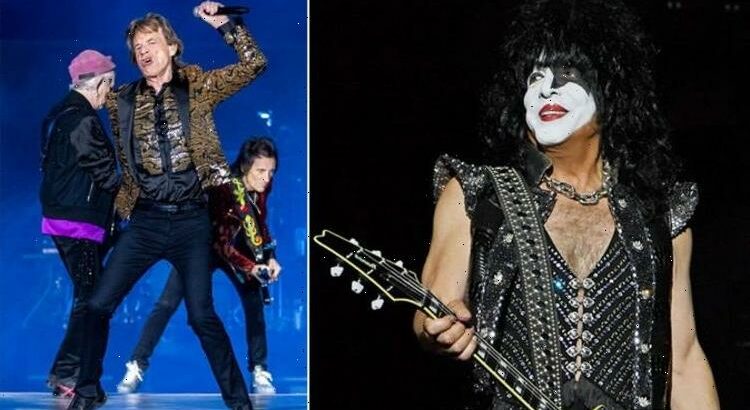 After a very long interruption to the tours, both The Rolling Stones and KISS are back out on the road. The Stones’ No Filter world tour resumed in September this year, tragically without Charlie Watts who died on August 24. KISS, meanwhile, are also picking up their apparently farewell End of the Road Tour. But they also found time to take part in the annual Kiss Kruise earlier this month. As frank and funny as always, frontmen Gene Simmons and Paul Turner entertained the fans onboard with their banter and bitching, as well as comments about other bands. SCROLL DOWN TO WATCH FULL INTERVIEW

Hosted on board by US actor Craig Gass, the band took questions from the audience.

First, they were asked how they chose which songs to perform on tour.

Stanley replied: “We try to keep the set list the one that people want to hear. Sometimes people go, ‘Why don’t you play obscure songs?’ Because the majority of people don’t know them. Quite frankly, songs are usually obscure because they’re not as good.”

Later on, he returned to the subject, when asked if the band would ever record an album of new material.

Stanley used another iconic group to justify his answer: “Why? Why would we need a new KISS album? I understand, but with any big classic band with a history, you go, ‘Oh, put out a new album!’

And the star admits the whole situation can be “frustrating” for any band.

DON’T MISS
Kiss: Paul Stanley confirms the end for the band ‘Time to stop’
Elvis girlfriend on where The King is now and how he could ‘come back’
Elvis was so turned on in classic scene you can see ‘Little Elvis’

Stanley added: “You can have great songs from the more recent albums but people then go, ‘Great… Play Love Gun!’

“So, beyond a little frustrating, the reality is, you (the fans) really love the old songs, and nobody is going to embrace new material – no matter how good it is – like you do the past because those songs are like snapshots from your past, and you’re connected to them in a way new material never could be.

“So, we’re happy going out and playing, that’s where we live, that’s our turf, (it) is the stage.”

Asked by another fan to pick their favourite song to listen to, not perform, it prompted a hilarious moment after Simmons tried to have a serious moment.

He said: “Songs are more than songs, they are something that affects your life. For me, it’s When You Wish Upon A Star. I was a little kid, I could barely speak English and I went to see Pinocchio and when Jimminty Cricket comes out,  I thought that little cricket was singing only to me…

“On a solo record I did in the late Seventies I arranged for the American Symphony Orchestra to back me and I remember I was in the control booth singing that song crying my heart out like a 12-year-old kid because the words are so true.”

Stanley quickly seized the moment to have a playful jab at his friend and bandmate.

He said: “It’s interesting your song comes from the movie Pinocchio about a guy who tells lies and his nose grows.

“It’s hard to come up with a single song… Of Kiss songs, I would say Love Gun, or Detroit Rock City.”