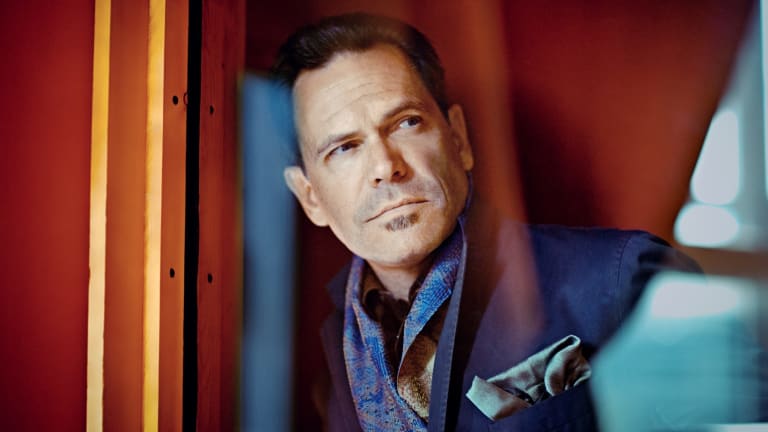 Kurt Elling is applying the language of jazz to material outside of the idiom.

In 1995 Kurt Elling exploded on to the international jazz scene – an instant star. He boasted constellations of vocal and improvisational devices, often cramming these into his music to the point of baroque ornamentalism. As he matured he reined this in, yet was still inclined to wear armour around his emotions.

Now, with this tour and his most recent release, The Questions, he completes the turning of another corner: applying the language of jazz to material largely from outside of the idiom. In so doing he solves a problem that besets all 21st-century jazz singers: what to do when the standard repertoire tastes stale, but when few contemporaries can compose such meticulously crafted work.

Dylan's A Hard Rain's A-Gonna Fall, an improbably wordy song for a jazz vehicle, had Elling and his glued-together band carefully contouring the dynamics and drama, from an a capella opening to an exhilarating wordless improvisation near the end. He back-announced this with mention of his stupefaction at current White House antics, and then left geopolitics to sing about death – and prove that some originals still cut it in the company of classics. The haunting A Happy Thought was penned by pianist Stu Mindeman, with arresting, almost mystical lyrics from Franz Wright.

From death he fled to love, and the rarely jazzified I Have Dreamed (from The King and I). Nor would Peter Gabriel's Washing of the Water rate prominently on most jazz singer's lists, but, performed as a duet just with curlicues of Mindeman's piano, Elling cleared a field upon which his glorious falsetto could play, as he did again in a startling scat solo against Clark Sommers's bass on The Waking.

Guitarist John McLean's orchestral thinking saw him often playing little or nothing, yet also unleashing two gripping solos. Local saxophonist John Mackey was a worthy guest, and new drummer Christian Euman brought buoyancy to the grooves and finesse to cushioning Elling's voice in its flights of invention now much closer to emotional truth than the over-adornment of old.