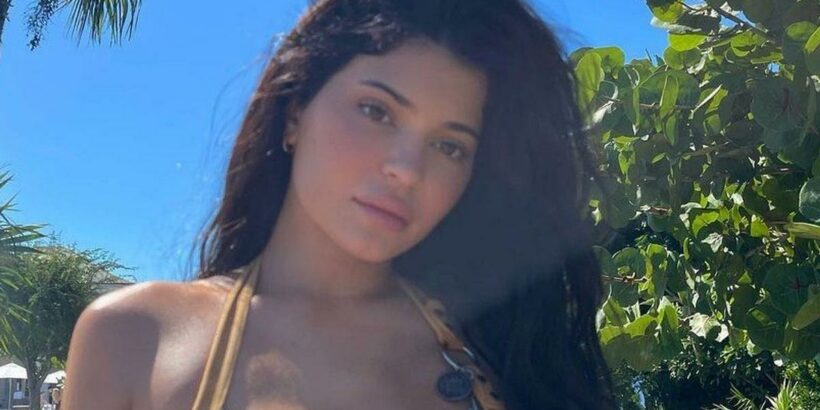 Reality star Kylie Jenner sent her followers into meltdown as she stripped down to just a tiny black bikini to wash herself in an outdoor shower.

Kylie, 23, looked stunning as she wore just a simple black string bikini for her shower display, adding some huge rings and polished nails to finish off the look.

Soaking up the sun in an exotic location, Kylie shared some sultry snaps of herself in the plunging black bikini while standing under cascading water.

Placing a hand on her washboard stomach, Kylie flaunted her hourglass curves as the bikini top struggled to contain her ample assets while the ensemble got soaked by the water.

The businesswoman could be seen behind a plant in the racy snaps, as she struck a pose with expensive jewellery on her fingers, leaving her fans hot under the collar.

Unsurprisingly, it didn't take long for the compliments to come pouring in from her fans, as they rushed to comment on the shower display.

One posted: "Nails on point."

Another added: "This is the one."

A third said: "This is so stunning." Meanwhile, Kylie has hit back at reports that she is back together with her rapper ex Travis Scott, and that they are also in an open relationship.

The star has always been quiet about her private life, but she took to social media to hit out at reports that she and Travis – who she shares daughter Stormi with – have rekindled their relationship.

Whilst she didn't confirm or deny they were back together, she did slam reports they were seeing other people while together.

She wrote: "You guys really just make up anything," sharing the comment alongside a screenshoot of an online article which read: "Kylie Jenner and beau Travis Scott 'rekindle their romance' (but are now in an OPEN relationship!)."

Kylie then added: "I'm not discrediting anyone who is in an open relationship but it’s just careless and disrespectful to throw this narrative out there without knowing what’s true.