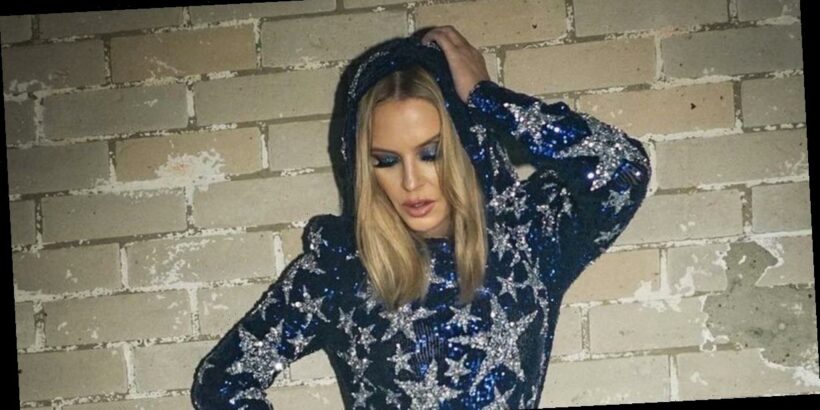 Kylie Minogue made a glittering appearance on CNN to ring in the New Year this week, blowing fans away with a dynamite stage look.

The Aussie pop darling, 52, went full-on sparkle, plumping to wear a hooded ballgown complete with slits up the side of each leg.

Splattered with silver sequinned stars, the dress was belted at the waist and fell to the floor in midnight blue sheathes of glitter.

Ahead of the performance, Kylie paused for a snap backstage, sticking out one of her legs to showcase the dazzling gown.

Her eyes were dusted with a blue shadow, and Kylie painted her lips with a dash of nude lippy.

Silver platform heels and a glossy manicure were the cherry on top, adding the finishing touch to the bombshell look.

Posting the outfit snap, she wrote: "Thanks for having me @cnn! #MAGIC."

In the comment section below, her celeb mates – and sister – gave the spectacular stage outfit their seal of approval.

Moments later, Kylie took to the stage to perform her chart-topping hit Magic, which lit up the airwaves back in September.

The pop powerhouse made headlines earlier this week when she released the Studio 2054 remix of Real Groove, featuring Dua Lipa.

Arriving as a New Year's Eve treat for her millions of fans across the globe, the new version features instrumentation and a pumped up-tempo.

The original song is from her latest record Disco, which was released to international acclaim last November.

When it came to crafting the album, Kylie took advantage of the time afforded by the lockdown, and let her creative juices flow.

Speaking to Elle last year, she explained: "There'd be challenges, but every day one of us would say, ‘We are so thankful to be able to do this, stay creative, keep working'."