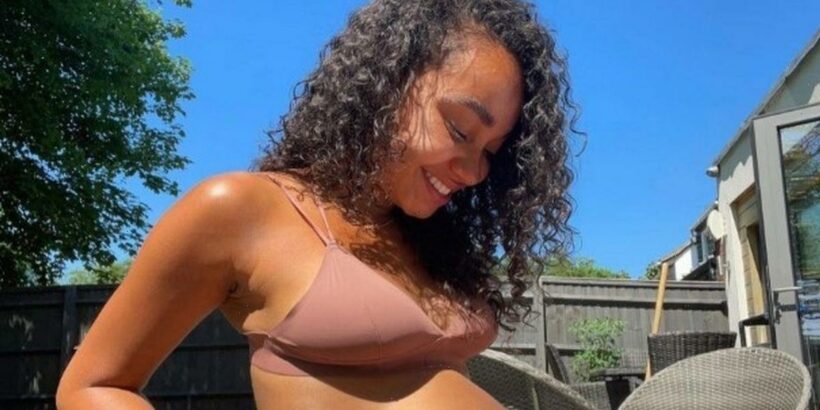 Little Mix babe Leigh-Anne Pinnock has teased that her due date is nearly here as she posted stunning photos showing off her incredible body with her blooming baby bump.

The 29-year-old is about to become a mother for the first time and she is clearly making the most of it as she documented her body growing throughout her pregnancy.

In what seems to be her final few snaps before she gives birth, Leigh-Anne posed completely nude as she ensured her bump was the main focus of a series of photos as she teased her due date.

Sharing the pictures to her 7.2million Instagram followers, Leigh-Anne wrote: "I have dreamt of the moment I get to meet you, hold you, guide you, teach you.

The photos of the mother-to-be saw her posing up a storm as her long locks fell right down her back and she held her bump while covering her chest.

In less than an hour Leigh-Anne received upwards of 11,000 likes as her fans filled her photo with comments as she looked glamorous in the snaps.

One user wrote: "You're glowing," while another wrote: "You look so beautiful," as a third person chirped: "This is so pretty."

Leigh-Anne has been praising her body for the incredible experience she has been having as a mother-to-be, with the beauty sharing a snap just two months ago of her growing bump.

At the time she wrote: "Time to give my body some credit, this is the hardest thing I have ever done. I have struggled over the past few weeks.

"Swollen hands and feet, bruised ribs and then chuck in a whole heap of hormones to the mix, but then I think about what's actually going on inside this belly and I'm mind-blown. Creating life. I am so proud of how far I've come and so grateful for this blessing."

Leigh-Anne announced her pregnancy on May 4 and fans were incredibly happy with her – and even more so when mere days later, her fellow bandmate Perrie Edwards also announced she was expecting.

Jade Thirlwall revealed that she was supporting the ladies behind the scenes as they attempted to keep their pregnancy secret from the crew they were working with to film the Confetti music video.

She was keeping it under wraps with her fellow Little Mix ladies until they both chose to tell the world earlier this year.

Two little mixers will be the youngest members of the group soon, and Leigh-Anne has teased that her due date is imminent.