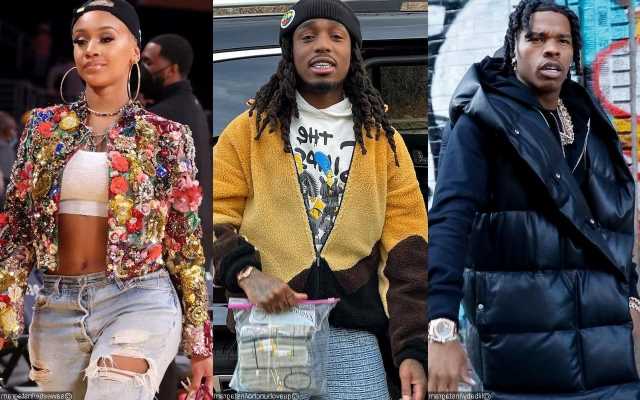 Internet sleuths are convinced that the ‘Do We Have a Problem?’ is taking a subtle jab at the Migos member and his ex-girlfriend with his songs on the newly-released album ‘It’s Only Me’.

AceShowbiz –Lil Baby and Quavo‘s ongoing feud appears to have reached a critical point now. The “Do We Have a Problem?” rapper has seemingly thrown shade at the Migos member over Saweetie cheating drama.

Internet sleuths have speculated that the 27-year-old hip-hop star takes a shot at Quavo and Saweetie on two songs off his new album “It’s Only Me”, which was released on Friday, October 14. On the track “Stand on It”, he raps the lines, “I don’t want your b***h, we can’t swap out (Swap out)/ They ain’t on s**t, tell ’em to pop out (Pop out).”

Many people pointed to Lil Baby’s line on the song as a shot at the “Quavo Huncho” artist. ” ‘I dont want yo bch, we cant swap out’ Lil Baby cleaaaaarly responded to that ‘we can swap it out’ comment Quavo made bout Saweetie ah sht,” one Twitter user theorized. “Lil Baby dissed Quavo on Stand On It lol ‘I don’t want your b***h we can’t swap out’,” another person opined, while someone else posted. “Lmaoooooo remember he took Saweetie shopping Quavo said it’s cool we can swap out.”

On the second song in question, “Not Finished”, fans are convinced Lil Baby is addressing the aforementioned rumors that he was seeing Saweetie after Quavo. Specifically, a picture Saweetie posted that implied they were together.

The alleged diss tracks arrived after there were rumors that Saweetie turned her interests to Lil Baby following her split from Quavo. It’s also rumored that Lil Baby took her on a $100,000 shopping spree. Responding to the speculation, Quavo said in an Instagram Story post, “Ain’t trippin we can swap it out!”

Quavo initially appeared to spill the tea last week on the track “Messy” from his new album with Takeoff, “Only Built for Infinity Links”, in which he appeared to reference Saweetie sleeping with his friend.

“I said, ‘Caresha please’ ’cause she too messy (Woo, please),” Quavo raps on the DJ Durel-produced track, a possible reference to Saweetie’s recent appearance on Yung Miami‘s “Caresha Please” podcast. “B***h f**ked my dawg behind my back, but I ain’t stressin’ (Not at all)/ You wanted the gang, you shoulda just said it, we would have blessed it (You shoulda just said it)/ Now s**t got messy (Uh).”